The A-Grav Zoomer is a vehicle featured in The Precursor Legacy. It was the first zoomer in the Jak and Daxter series, and built by Keira.[1] The vehicle is used numerous times throughout the game, to cross lava and other impassable terrain, to defeat certain flying enemies, or to achieve speeds otherwise impossible.

Jak initially used the zoomer during the mission "Destroy the balloon lurkers" at Misty Island, followed by the race through Fire Canyon to reach Rock Village before the heat caused the zoomer to blow up, although this was only possible with the necessary twenty power cells to power the heat shield.

At Rock Village, Jak had to use it again in a collection of missions at the Precursor Basin, including a time trial at the Dead Man's Gorge race. After defeating Klaww, Jak encountered three pedal-copter lurkers at the entry to Mountain Pass, who intended to warn a quicksand lurker at the end of the pass to detonate the pass with large planted explosives. Jak managed to beat them to the lurker, however, and destroyed the detonator.

The last time Jak had to use the zoomer was at Lava Tube, although seventy-two power cells were needed to increase the power on the heat shield, after which he managed to cross the tube and reach Gol and Maia's citadel.

In Jak II, the remains of the zoomer can be seen among the wreckage of what was once Samos' hut.

The zoomer is a single-seated vehicle made mostly of red scrap metal. It has three stabilizer fins at the back, a propeller at the front to give propulsion, and one underneath to give lift. The controls are a pair of handles each mounted on the front and to the sides of the zoomer. Mounted next to the stabilizer fins are a pair of boot-like shapes, which Jak can rest his feet in while piloting the zoomer.

The A-Grav Zoomer is a sturdy and reliable vehicle. It can safely crash into numerous walls or lurkers without suffering a penalty to the speed output. It has no significant speed, as both robbers and pedal-copter lurkers can outpace it. The only thing the zoomer cannot handle is either extreme heat or explosives, and although the heat can be handled with a heat shield, over time even that defense will fail and cause an explosion.

Jak can also fly through eco clusters (or eco vents) to pick up either green eco, blue eco, or yellow eco, each with varying effects. Green eco is automatically dispersed over the ground and is only useful to cure dark eco infected plants (though it can also restore Jak's health meter). Blue eco functions as a very short-term acceleration and a long-term (depending on the amount picked up) speed boost. Yellow eco is instead used to destroy obstacles and is activated the same way as you would without the zoomer (by pressing 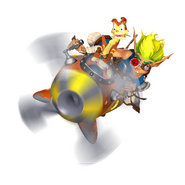