Jak and Daxter Wiki
Register
Don't have an account?
Sign In
Advertisement
in: Locations in The Lost Frontier, Aeropans

Aeropa is a location in The Lost Frontier. It is a small city-state on the Brink, formerly ruled by Duke Skyheed and Chancellor Ruskin. At the height of the eco shortage crisis, the Aeropans had just finished development of a dark warrior program similar to that of Haven City, resulting in a fatal war with a rebel faction, the Sky Pirates, led by former Aeropan Air Force commander, Phoenix.

Upon Jak, Daxter, and Keira's arrival to the Brink, Aeropa appeared harmless and hospitable, though the discovery of the program would later put the trio at odds with the city and in alignment with the so-called pirates. Despite boasting a powerful new army of dark warriors as well as the highly advanced Aeropan Navy, the Aeropans eventually met their downfall and the city's future remains unknown.

Little is known of Aeropa's history. For some time before Jak, Daxter, and Keira's arrival to the Brink, Aeropa had been losing a terrible war against an unspecified threat. Skyheed, the city's ruling duke, thus put Commander Phoenix of the Aeropan Air Forces in charge of a secret weapons program, which the Commander later discovered to be a sort of dark warrior program. When he realized what they were doing, Phoenix attempted to stop the program, though Skyheed refused.[1]

Presumably near the same time, the chief scientist of the program, Tym, had built war bots in an unsuccessful attempt to rebelliously take back the program's facility by force, unbeknownst to Phoenix. When Phoenix rebelled against the Aeropans, he kidnapped Tym as to hide his work from the Aeropans (and presumably to prevent any further progress). During the scuffle, Tym took a blow to the head, inflicting amnesia, and Phoenix marooned him on Brink Island.[1]

At some point, Aeropa's war ceased, presumably to the city's victory as it appeared peaceful and intact when Jak visited there. However, ever since the Aeropans started looking for the eco core, Phoenix and his band of rebel pirates increased their attacks on them, according to Skyheed,[2] and the two factions were described as being in constant war with each other.[3] One particular battle took place over Brink Island, wherein several Sky Raider-piloting pirates ambushed the Aeropan ACS Behemoth. Jak decided to help the Aeropans by shooting down the pirates, as he just had a scuffle with them resulting in the crash-landing of their ship. Skyheed thereafter took Jak, along with Daxter and Keira, back to Aeropa, saying any enemy of the Sky Pirates is his ally.[2]

Once there, Skyheed told Jak and Keira about the eco seeker: a special device said to point to any major source of eco. Keira requested that she borrow it to study it, and Skyheed agreed on the condition that Jak could prove he could protect the seeker by beating the Danger Course, though they could only keep it for a week.[4] On Jak and Daxter's way back to the sanctum after beating the course, Daxter fell into a manhole, landing him in Aeropa's sewers. While searching about for Jak, Daxter was unexpectedly doused with loads of dark eco waste, turning him into Dark Daxter. The twice-over mutated ottsel then explored the sewers, before finally making his way back to Jak.

The duo then arrived back at the sanctum along with Keira to meet Skyheed and Ruskin. Just after Skyheed tossed the seeker to Keira, Phoenix swooped in and snatched the seeker out of her hands. Keira impulsively leapt toward the pirate's plane in pursuit of the seeker, but was pulled in and taken away by Phoenix. Jak thus promptly chased after him.

War with the Sky Pirates[]

The sky chase and subsequent interactions with the pirates led Jak to allying himself with them, as he eventually discovered Aeropa's dark warrior program, thanks to the help of their new friend Tym as well as Phoenix's revelation of his past.

While the Sky Pirates' activities avoided the detection of the Aeropans, it was too late as both Skyheed's dark warrior program and the new Aeropan Navy were in full swing. Every Aeropan citizen was now infected with dark eco,[1] and with a robust military on his hands, Skyheed began engaging the pirates in several battles before the war was taken back to Aeropa, after Skyheed gained access to the eco core. One particular battle followed a surprise siege on Far Drop, during which the Aeropans executed aggressive air strikes with heavy fighters and attempted to strike Far Drop with a large dark eco weapon. The siege resulted in several friendly casualties, including people close to Phoenix.[5] Jak, Daxter, Keira, and all the freedom fighters Phoenix could command thus laid siege on Aeropa in retaliation via a warp gate at the Aeropan barracks, the access code of which was secretly communicated to them[6] by Ruskin, who felt the program had gone too far.[7]

The attack on Aeropa ended with a boss fight between Jak and Skyheed, who had now transformed himself into a dark eco giant with the help of the eco core. Skyheed killed Ruskin after learning of his betrayal, but failed to best Jak, and was forced to escape in a personal heavy fighter. After going in circles, forcing Jak to withdraw from the chase, Skyheed retreated to the ACS Behemoth, where he set course for the eco core. Phoenix eventually sacrificed himself by ramming the Phantom Blade into a massive stream of dark eco being soaked up by the Behemoth, leaving the flagship exposed for Jak to finish off. He did so, killing Skyheed and presumably whoever else was on board. The consequences inflicted upon Aeropa, aside from architectural damage due to the war, are unknown, as any following leadership was never implied. 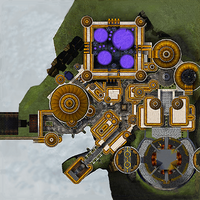 A map of Aeropa's layout.

Aeropa has a very small and fairly simple layout. It appears to be built into a mountain-like structure, as indicated by both its map as well as the fact that its streets are frequently broken up with stair cases of varying lengths (some very short and some very continuous). However, it could also be held up entirely by Precursor architecture, as indicated by early concept art, not unlike other Brink locations. It is also possible that it is a combination of both, as Brink Island featured hollow mountains exposing Precursor pillar-construction. However, it is ultimately difficult to determine with any certainty, as it is never observed from the outside.

Aeropa is very high class in esthetic, with towering, elegant architecture, accented with trees, shrubbery, and other floral beds and decorations. Its streets are so short and narrow that vehicular transportation is not utilized, also resulting in the rather open placement of cafe tables, street benches, and large vases. The streets are lined mostly with decorative fences and lamp posts, and many of them peer out into the horizon. Small Precursor statues can also be found littered around the streets, and can be used for orb search side missions.

Aeropa has certain structural places of note. The first is the hangar, which Jak once used to park and repair his Hellcat. The courtyard in front of the hangar also offers some introductory scenery to the city. Just around the corner is the Danger Course, an elaborate gun range-like facility dedicated to the practice of arms fire and agility (similar to the gun course in Haven City). North of the Danger Course, or around the leftmost corner, is a relief system from the sewers, which can be used by Daxter to gain access to the area (see § Aeropa sewers below).

Across from the sewers area is where Keira stands when you visit the first time, and can be approached to exchange dark eco for eco skills. The stairway behind her leads to a courtyard with access points to the rest of the city, and is indicated with a large imprint of Aeropa's crest on the ground. The southern door leads to a large hall lined with statues and flags of Aeropa, at the end of which is a small room with the warp gate connected to the barracks. The northern gate leads to the eco seeker sanctum, entailing a few flights of long stairs that end in a small street block with a water fountain at the center.

North west of the central courtyard is a makeshift path used by Jak to reach the palace, though this path was only exposed after being bomb-struck by a pirate plane during the siege. During this particular time in the game, this is the only path of travel available as other entrances have been blocked off. Along this rather elaborate passage, Jak encounters various facilities, buildings, and special rooms, including a large area with several dark eco silos, as well as a room just preceding the palace in which Jak encountered the hyper mutant. Most notably, however, is the weapons control room, just preceding the hyper mutant stage. This very powerful and strange device was capable of rescinding Jak's weapon use. The palace itself was not featured very prominently, though it was the stage of the boss fight against Skyheed.

Aeropa's sewers are fairly typical for an urban underground sewage system, though it is notably inundated with liquid dark eco as opposed to city sewage, and also contains several dark eco crystals. It is inhabited by voltaic eels and ghoul spiders, though both are interestingly in only their first or no stage of mutation. The first sewer sequence consists of a set of narrow pathways separated by thick doors, which can only be busted with Dark Daxter's frenzy mode.

After that is a type of pumping station, the pistons of which represent an obstacle in the pathway. They can only be stopped by throwing ghoul spiders over them for their sticky webbing. Next is a pathway substantially guarded by turrets, most likely placed there strategically to prevent unauthorized access to the proceeding area: a control room with computer panels and power harvesters that contain eels. This area contains a final exit in the top right corner, at which an elevator resides that will take Daxter back to the Aeropan streets.