Jak and Daxter Wiki
Register
Don't have an account?
Sign In
Advertisement
in: Locations in The Lost Frontier

15 (locations)
The Aeropan barracks, known as the old Aeropan barracks in the Phantom Blade console, is a location in The Lost Frontier. It is situated at some length before the Brink, and its geographical relation to Aeropa is unknown. It served as the training camp and military barracks for the Dark Warrior Program, and is also where the dark eco sage Tym developed the project for the Aeropans.

The barracks served as the primary base of operations for the Dark Warrior Program, as it is where the scientist behind the project, Tym, developed it. Tym eventually saw the inhumanity of the project and tried to take the facility back, but was eventually captured by the Aeropan officer, Phoenix. Phoenix had also defected from the Aeropans, and decided to kidnap Tym to impair the program, though he evidently was unaware of Tym's defection as well (and was not able to figure it out due to a "scuffle" in which Tym took a blow to the head).

Thus, progress at the barracks presumably halted, where the Aeropans then seemed to move research for the program to the new research rig. However, after successful mutations of non-human subjects (namely apes), the Aeropans presumably moved back to the barracks (hence "abandoning" the research rig in favor of the "old" Aeropan barracks), where they proceeded to successfully mutate citizens into dark warriors (namely manifested in the Aeropan commando and ethereal sub-commander),[a] and thus effectively picking back up where Tym left off.

After activating the eco seeker with the rare light eco, Keira discovered that the seeker was still missing three parts (specifically coordinate spheres), and was pointing to their location in an attempt to repair itself. One location was Far Drop and the other was the barracks, and Phoenix rather abruptly decided to head for Far Drop, which Jak contested, citing the fact that the barracks was closer. Phoenix deferred to Keira, who deferred to Jak, who elected the barracks (Phoenix was likely reluctant to go to the barracks due to his past there and would have rather made more progress by finding the first coordinate sphere first).

Upon arrival to the barracks, Jak discovered the facility was locked. Keira attempted to electronically bypass the passcode terminal, but was shocked as a result of the barracks' countermeasures. Mysteriously, Tym (who had not yet regained his memory of the barracks), walked up to the terminal, entered the passcode, and walked in. Once inside, however, the barracks alarm was activated and the door leading to the coordinate sphere was locked behind Keira, Phoenix, and Tym. Thus Jak had to navigate through an elaborate maintenance tunnel to meet back up with the group.

While Jak fought through the barracks' maintenance tunnel, encountering various commandos, armored armadillos, and a sub-commander, Tym gradually regained memory of the facility and told Keira everything he remembered. When Jak and Daxter arrived, he revealed that he built the facility for the Aeropans, at which point Phoenix revealed his past as well. Phoenix mentioned that he defected from the Aeropans to destroy what they had become, including what Jak had become (referencing his Dark Jak abilities), though just before killing him Keira and Tym convinced him otherwise. After Keira's pleas, Tym told Phoenix that he could not "kill [his] way to forgiveness", convincing Phoenix to team up with Jak in destroying the Aeropans.

Immediately afterwards, the group received a transmission from Klout who was manning the Phantom Blade, who relayed that the barracks had activated a defense system and was targeting the Blade. Said defense system included a barrage of laser turrets, and occasionally a guided missile trained on the Blade that Daxter would have to re-guide into the missile's original launcher, of which there were three. The duo thus destroyed the defense system, successfully defending the Blade.

After Aeropa's siege on Far Drop, Phoenix demanded a retaliatory siege, though Keira stated that they would see them coming on their long-range scanners. Just then, a secret defector transmitted a message to the Phantom Blade, telling them to use the barracks' warp gate. Tym recalled that he built the transport a long time ago, but that Skyheed locked it with a passcode, at which point the code was sent by the defector (who turned about to be Chancellor Ruskin). The group thus set course for the barracks, and flooded it with every Sky Pirate soldier willing to go, including Keira and Jak, themselves (though Phoenix stayed behind so he could drive in the Phantom Blade later during the attack).

While people were teleporting, Daxter was grabbed by a commando, which angered him enough that he transformed into Dark Daxter. He proceeded to crush the commando and ravage the barracks, exploring what is presumed to be the main part of the facility. Afterwards he met back up with Jak and Keira at Aeropa after transforming back into his normal self.

The Aeropan barracks is situated among a small cluster of mountainous islands in the middle of the sea, which likely sit before the Brink. Evidence that it is close to the Brink is manifested in a small, localized, and closed break in the sea floor, ending in foggy endless depths. This small break also has exposed Precursor structures, and sits between a big and small mountainous island. The Phantom Blade docks to the north of it, near the smaller islet. The resident pirate radio tower, specifically known as Outpost Epsilon, sits on the opposite side of the same smaller islet.

To the north of the Phantom Blade is a very small islet, on which the resident Precursor statue sits. To the north of this is the biggest present island, which nearly entirely consists of large, ice-capped mountains, littered with nothing other than dead and/or leafless trees. It is possible part of the barracks is built into this, although there is no visible evidence, other than the fact that the entrance to the barracks sit on an island far too small to house the whole thing (and the facility does not noticeably go down several levels). Said island is situated to the west of the aforementioned fixtures, and is guarded from the east-side by a set of three walls, out of which missile launchers armed with turrets will rise when activated.

The facility itself is preceded by a defile complete with a rocky terrain, dead-looking grass, the occasional weed, leafless dead-looking trees, and a single Precursor idol, which gives Jak the eco shield power. Ahead of the entrance door is a small room, with a laser barrier ahead and a similar-looking door to the left. Ahead of the barrier is a narrow pathway checkered with pools of dark eco and steel platforms, at the end of which is a small bunk room to the right. To the left is another small room, which seems to primarily serve as a den for the armadillos, as the walls are lined with cages and at the center is a large feed dispenser with troughs on either side. To the left of the door is another door which leads to an airlock, which leads to a small puddle of dark eco preceding a room filled with laser barriers.

This room involves a puzzle within the grid of 22 barriers, which have to be deactivated by standing on their corresponding buttons, for which Jak had to use his eco teleport power with Precursor totems. This room contained nine incubation tanks, only six of which contained comatose commandos in them; the other three were broken and empty. To the far left of the entrance to this room is another door which serves as the exit. After navigating the hallway that follows is a large monitoring room, filled with commandos, armadillos, and an ethereal sub-commander. It is also lined with computer terminals and armadillo cages, as well as five additional laser barriers. To the right is an exit, which leads to the control room. The exit to this room is the same door located to the left at the original entrance to the facility. The only time you enter this door (as opposed to exiting) is the second visit to find the warp gate and get to Aeropa.

The soldier compound, which is the area of the barracks that Dark Daxter visits, is very linear, consisting mostly of hallways adjourned by small, usually square, rooms. There are four "lab"-like areas, which are larger than the other rooms, and contain experimental equipment, most notable of which are injection chairs similar to those found in the Aeropan research rig and Haven City fortress (from Jak II).

The entire area is lined with strange tubes full of green fluid, which is similar appearance to the incubation tanks found elsewhere in the barracks, and could possibly be conduits for such fluids. There are indeed several dark warrior incubation tanks, except these hold much larger commando-looking soldiers with a slight uniform change. These specific enemies are never encountered in combat in the game.

The entire area is littered with open flame valves, dark eco crystals, concrete barriers (destructible via Dark Daxter carrying fire to nearby explosives), laser barriers (toggled via batteries on the ground), and the highest concentration of commandos and gladiators observed in the game (which seem to spawn endlessly from the numerous, inaccessible door ways placed along the walls). This compound appears to be specific to these soldiers, with certain access points requiring them to stand on top of large digital scanners on the floor. 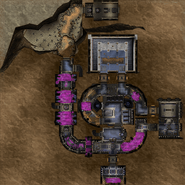 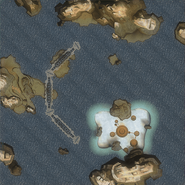 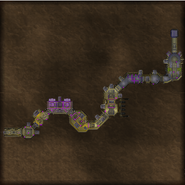