The aphid lurker[1] is an insectoid lurker enemy in The Precursor Legacy. They spawn from the dark eco plant, protecting and guarding it during combat in the Forbidden Temple during the mission "Defeat the dark eco plant". The bug is a stubby, green, spiked insect, with typical lurker features such as large yellow eyes, appendages over its jawline, and a solid necklace. 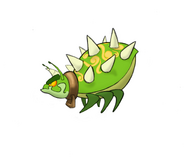 Concept art.
Add a photo to this gallery

Retrieved from "https://jakanddaxter.fandom.com/wiki/Aphid_lurker?oldid=131298"
Community content is available under CC-BY-SA unless otherwise noted.