The Arena of Death was the training course and battle arena in Spargus used by those who wished to prove their worth to King Damas, by earning battle amulets and earning the official title of "Wastelander". It was featured in Jak 3, during which battle participants (namely Jak) would fight captured marauders in various matter-former arrangements until the death. Sometimes Damas would arrange courses which were only used to survive the lava, and sometimes he would arrange battles between two wastelanders (such as Sig vs. Jak).

The arena levels were either matter-former courses or agility courses, the former of which consists of rectangle-shaped platforms that may sink into the lava at any given moment, leaving only small island platforms to stand on and survive. Jak had to conquer three of these in the missions "Earn 1st war amulet", "Earn 2nd war amulet", and "Defeat marauders in arena". The agility course was only seen once, in the mission "Complete arena training course", and consisted of ramshackle wooden structures with a typical platformer game-style layout.

Rules of the Arena[edit | edit source]

As king of Spargus, Damas ensured the purity of the arena. The only known sacred rules of the arena were:

Infractions with the second law would "defile the arena" and normally result in the wrongdoers being banished from Spargus. Jak and Sig refused to kill each other, but their usefulness allowed them to make up for it by accomplishing the mission "Destroy eggs in nest".

The arena itself consists of a lava-filled crater on the coast of the Wasteland residing in the north-east sector of Spargus. The arena is structured with volcanic rocks, and cuts off at the coastline, allowing for a scenic view over the ocean. Stands are lined along two walls for spectators, with Damas' throne resting between the two. Damas' throne is placed directly in front of the arena which is located below. "Matter-formers" are able to be adjusted to tweak the layout of the arena as per needed. 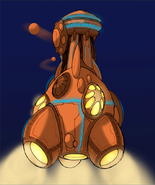 Concept art of the space shuttle seen in the arena at the end of the game.
Add a photo to this gallery
Retrieved from "https://jakanddaxter.fandom.com/wiki/Arena_of_Death?oldid=135217"
Community content is available under CC-BY-SA unless otherwise noted.