The armadillo[1][2] is an enemy type in The Lost Frontier. They are among several hostile creatures encountered at successive levels of mutation in and around the Brink and Aeropan facilities. This includes the standard type encountered on Brink Island, a fire-breathing volcanic type in the Brink volcano, and a dark eco-mutated type in the old Aeropan barracks, known as the armored armadillo[3] or armored hound.[4]

The first enemies encountered in the game, they are one- to five-hit pawns (depending on the type and attack) with relatively simple combat mechanics. However, as the game progresses, their increasing mutation gives them additional abilities and thus more challenging mechanics.

The presence of the armadillos and their hostile behavior were never explained, though it is presumed they were experimented on by the Aeropans as part of the Dark Warrior Program, and either were released in or escaped to the wild. They were encountered in three missions, each time as different variations, taking on aspects of their environment (similar to the successive levels of mutation observed in mutant apes, voltaic eels, and ghoul spiders).

The first variation was encountered on a small stretch of Brink Island where the mission "Find green eco fuel" takes place. They appeared to be the least mutated, still retaining a natural light brown color and exhibiting no unnatural abilities. Although equally as hostile, they were weaker than their volcano and dark counterparts and possessed only a bite and roll attack.

The second variation was encountered throughout the Brink volcano, where the mission "Search volcano for eco seeker" took place. This version had a much darker skin color, and most notably could breathe fire. The shell is humped higher and sits lower to the ground compared to the taller-standing Brink armadillo.

The third variation was encountered in the old Aeropan barracks during the mission "Search the barracks for seeker piece". They were utilized as both premises defense and personal attack dogs by Aeropan commandos. In the former case, they were kept in cages until an intruder arrived, at which point the cage doors opened and the armadillos rolled out. In the latter case, they were leashed on an energy tether before being released to sic the intruder. This variation had a chromed shell with purple undertones, dark-colored legs, head, and tail, with a more shallow shell, longer legs, and larger spines. Said spines were used as projectiles which they launched at their target as a special attack.

The armadillo is physically most comparable to the long-nosed armadillo (albeit with only a few bands). It possesses three rows of large spikes strong enough to bust open crates without forceful collision, along with sharp teeth, wide jaws, and red, beady eyes.

The armadillo is a prolific digger, with large claws adapted for burrowing underground, which it often uses to its advantage in combat. It seems to be insectivorous, as when idle it can be observed gnawing into the ground to pick out food. However, considering its hostile nature and Daxter referring to the creatures as "flesh eating",[1] it may be carnivorous in general.

When idle before spotting prey, the armadillo will not burrow, indicating it dwells primarily above ground. It is very aggressive once it spots prey, but will quickly burrow underground if said prey moves out of range, and will reemerge when it moves back. While the dark variation is never observed burrowing, the area in which it inhabits contains no soft terrain, therefore it is presumed it retains the actual capability.

Upon first encountering an armadillo you will have to rely on melee attacks, as you will not yet have equipped weapon mods for the Gunstaff (unless you revisit the area). The spin kick works well when flanked, though two are required to defeat them, compared to only one punch attack. The only downsides to the punch are its lack of fluidity and undeviating line of attack. Beware of the armadillo's roll maneuver, which is its most dangerous, as it is rather fast. It will use this attack upon first spotting you, so side-step its line of attack before it arrives (a task proven sometimes difficult due to poor camera control).

Volcano armadillos are a simpler engagement, as they can be shot easily from a distance with the Blaster, or taken out en masse at short range with the Scatter Gun, each weapon requiring only a couple shots. However, they are still easily taken out with melee attacks in the same fashion as their Brink counterparts. One noticeable caveat to these enemies is their fire breath, which is short-ranged and short-lived, and thus only a danger when not paying attention or when flanked.

The armored armadillos are considerably stronger, requiring up to five punch attacks to defeat. Additionally they are much more of a nuisance, as in combination with their bite and roll attacks, they are capable of clenching their abdomen to discharge their spines, which will thereafter regenerate and are considerably harmful. The best strategy to take on these enemies is to release a barrage of gun fire in combination with successive melee attacks. 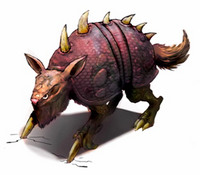 Early concepts (pictured right top) of the Brink armadillo featured purple armor, a furry tail, a bearded chin, armored or mechanical legs, only a single row of spikes down the back, and one large claw on each fore paw (akin to the giant armadillo).[5] This concept made it to beta (pictured right bottom),[6] but was later changed in favor of the current appearance.

Retrieved from "https://jakanddaxter.fandom.com/wiki/Armadillo?oldid=133833"
Community content is available under CC-BY-SA unless otherwise noted.