The Armor of Mar is a set of body armor featured in Jak and Daxter series. It was said to have been worn by Mar himself during his ancient battles in the Metal Head Wars.[1] Later in the future, six pieces were recovered by Jak who wore them during the events of Jak 3 and gained an increment of maximum health capacity as a result. The armor is made of Precursor metal along with a polymer-like mainstay allowing for Jak to fit the armor.[a] Nearly each piece consists of overlapping plating, connected to the body by straps, cuffs, or braces.

The bracers are arm guards, and were found by Jak during the mission "Race for artifacts". After showing them to Damas, he relayed that Pecker believed them to be very rare and worn by Mar in ancient times.[1] They were the only Precursor artifacts that Damas allowed Jak to keep following the hunt.

The next set of armor are the greaves, a pair of shin and in-step guards, found by Jak in the eco mine during the mission "Explore eco mine". The third piece is the shoulder plate, found on an ancient Precursor pillar (the same pillar where the Astro-Viewer is later found) in South Haven Forest, after completing the mission "Kill dark plants in forest".

The final piece of the armor is the breastplate that Damas gave to Jak after completing "Defend Spargus from attack" as a personal gift. He originally intended to give it to his son, but he never found him and eventually gave it to Jak.[b] 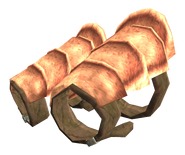 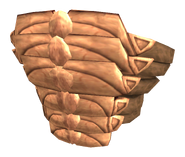 Breasplate
Add a photo to this gallery

Retrieved from "https://jakanddaxter.fandom.com/wiki/Armor_of_Mar?oldid=135987"
Community content is available under CC-BY-SA unless otherwise noted.