The Astro-Viewer is a Precursor artifact in Jak 3. Located in South Haven Forest, it is an ancient device used as both a telescope and a medium for technopathically connecting to some other endpoint. It could only be activated in combination with five other artifacts: the Holo Cube, Beam Generator, Precursor Prism, Quantum Reflector, and Time Map. The Precursors could also use it to communicate with its user, as through an Oracle.

After collecting all requisite artifacts over the course of the game, Jak used the device twice after uncovering it: once to observe and receive a warning about the Dark Maker ship, and twice to physically control the Dark Maker bot inside the ship to sabotage it.

Samos Hagai had been aware of and interested in studying ancient pillars in South Haven Forest, believing them to link to the Precursor core catacombs. After dark plants began growing in the area, he became concerned he would be unable to do so, suspecting someone was experimenting with dark eco.[1] Jak cleared them, in the mission "Kill dark plants in forest", resulting in six pillars peaking out of the water in the center of the forest. After Jak stepped off the larger central pillar, it rose to a great height and became inaccessible. Samos discovered that the structure required five other artifacts in order to be activated.[2]

Later, Sig's scanners picked up artifacts in the Wasteland. Jak collected them, in the mission "Race for more artifacts", ultimately collecting the Holo Cube, the first artifact required to activate the Astro-Viewer.[3] Soon after, Jak took out assailant marauders in the mission "Defend Spargus' front gate", the last of which dropped the second requisite artifact, the Beam Generator.[4]

Seem then contacted Jak after marauders had attacked one of the Precursor Monks' artifact digs, stealing the Precursor Prism and taking it to their stronghold. When Jak retrieved it for them, in the mission "Take out Marauder stronghold", Seem gifted the Prism to Jak as a gesture of gratitude.[5]

Jak eventually went to Kleiver in search of any other artifacts, who mentioned that he had just sold the Quantum Reflector to a band of metal heads.[6] Jak and Sig hunted them down and acquired it, in the mission "Chase down metal head beasts". The Reflector was the last artifact needed, though even Pecker was not sure exactly what it did.[7]

Keira had meanwhile been researching each of the collected artifacts, discovering that they were older than any other known Precursor ruins, aside from the catacombs, and that they linked to a planetary observation system.[8] With four of the five required artifacts, Jak was able to activate the pillars in South Haven Forest and approach the Astro-Viewer, in the mission "Beat pillar ring challenges".

There, the Precursors were able to communicate with Jak as through an Oracle. The voice warned of the approaching Dark Maker ship as the "seed of our destruction", saying that the former Precursors, now corrupted by dark eco, are coming to claim the earth for themselves. The Precursor then told Jak of a Planetary Defense System deep at the core of the planet, adjuring him to save his world, unlike many other planets "whose fate has already been closed".[9]

Later on, Errol discovered a way to link with the Dark Maker ship. Finally believing Jak to have the necessary balance within him, Seem gave Jak the final and most important Astro-Viewer artifact, the Time Map.[10] However, Errol had since alerted the ship, which raised its shields. Samos believed that the Astro-Viewer could lower them, assigning Jak the mission "Activate Astro-Viewer in Haven Forest".[11] With all five artifacts in hand, Jak used the Astro-Viewer to technopathically link to a Dark Maker bot, compromising the ship's shields from within, in the mission "Destroy dark ship shield". This would allow Jak to activate and use the Planetary Defense System to destroy the ship, in the mission "Destroy dark ship".[12]

The Astro-Viewer allows the user to observe space similar to a telescope. If used in combination with five other ancient artifacts (including, most importantly, the Time Map), it can technopathically transport the user's mind to some other endpoint. The Dark Makers were also able to teleport from, presumably, the Dark Maker ship, through the Astro-Viewer, and to spawners to invade South Haven Forest.[13] Research revealed that the Astro-Viewer and its artifacts are some of the oldest ever discovered, and that Mar wrote that the device could reveal "wondrous truths".[14]

The Astro-Viewer itself is placed atop the largest pillar in the forest. The base of the device is a sphere, but divided laterally and separated out. The middle segments are made of Precursor metal, while on its longitudinal ends are spheroid blue-green lenses or gems. When the Dark Maker spawners connect to the Astro-Viewer, it is this specific part of the device to which dark eco bolts connect. Perpendicular to this is the telescope of the device. The Holo Cube, Quantum Reflector, and Prism orbit the telescope, while the generator is locked to the right side. The Time Map is inserted into the top of the telescope.

Surrounding the Astro-Viewer is a sort of abstract orrery, with rings and spheres made of Precursor metal markedly similar to that of the Forbidden Temple's from The Precursor Legacy (albeit much smaller). It is unknown what purpose these serve.

Each artifact is at least partly constructed of Precursor metal, if not entirely. The first artifact, the Holo Cube, consists of a frame in the shape of a cube surrounding a glowing blue sphere. The Beam Generator is an amalgam of Precursor metal pieces, at one side of which is a green lens, presumably for emitting the beam generated by the artifact. The Precursor Prism consists of a tubular shaft with three green shards spaced evenly around. 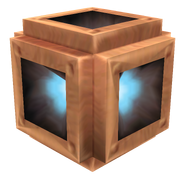 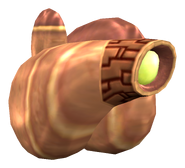 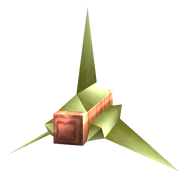 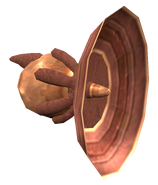 Time Map
Add a photo to this gallery

Retrieved from "https://jakanddaxter.fandom.com/wiki/Astro-Viewer?oldid=136442"
Community content is available under CC-BY-SA unless otherwise noted.