10
The Blaster is a weapon used by Jak during Jak II, Jak 3, and The Lost Frontier. It is a yellow mod Morph Gun and gunstaff weapon powered by yellow eco, useful for its powerful, long-range precision.

Jak first received the Blaster from Krew after completing the mission "Destroy turrets in sewers", at which point he had to complete a gun course training session to learn how to use it. In Jak 3, Damas awarded Jak the Blaster upgrade after the mission "Earn 1st war amulet".

In The Lost Frontier, Jak received this gunstaff upgrade from the Aeropans in the Danger Course to prove he could protect the eco seeker at all costs. The gunstaff Blaster functions identically to the Morph Gun Blaster, but has a different appearance due to operating on a different weapon.

The ammo is represented by a gray canister with yellow bars. The laser, housed in the bottom barrel, is low-intensity and assists with aiming. Jak is able to automatically target enemies within reasonable proximity as signified by the laser's bright end point. Jak holds the Blaster under his arm and aims at his shoulder, similar to a rifle.

The Blaster is a noticeable upgrade from the Scatter Gun, with a higher rate of fire, better accuracy, and a long range. Because of this, it is more useful in battles against long-distance, flight-bound, tactical, or lone enemies (e.g. the wasp, metal jacket, or centurion).

Its only deficiencies appear to be in close-range battles, particularly with a large amount of enemies, due to its narrow radius and precise aiming tendencies. However, that is easy to overlook with its "wastelander combo", executed using a combination of firing and a melee attack. If preceded by a melee attack, the Blaster will unleash a rapid-fire stream of three blasts. However this also means that ammo will drain quickly, so in making up for a deficiency it also cancels itself out.

There are two primary variations of the wastelander combo, each useful in different situations. For a brute force attack, it is most efficient to punch (

) immediately afterwards. Jak will deliver a crippling strike with the bottom of the Blaster then follow with a quick succession of Blaster streams. This is enough to take out most medium-sized enemies in a single sitting, but also largely augments the damage dealt to stronger enemies such as the juice goon, tripodbot, or blast bot.

The second one is an aerial attack, and is useful for taking out a large amount of enemies at all sides. This is performed by jumping in the air (

) then firing at the same time. This will produce a 360-degree barrage of five yellow blasts, and due to the Blaster's weight and aiming capabilities, it will be mostly accurate with few misses. The fact that Jak is in the air and still delivering an attack on his way down makes it a safe way to deal with an overwhelming amount of enemies, or otherwise emergency cases, such as low health. 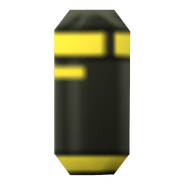 Gunstaff ammo
Add a photo to this gallery
Retrieved from "https://jakanddaxter.fandom.com/wiki/Blaster?oldid=136476"
Community content is available under CC-BY-SA unless otherwise noted.