Jak and Daxter Wiki
Register
Don't have an account?
Sign In
Advertisement
in: Locations in The Precursor Legacy

Boggy Swamp is a location in The Precursor Legacy. It is a backwoods marshland located just north of Rock Village, accessible via pontoons (after the Warrior puts them back) leading just off the village's coast. Common to other locations in the game, Boggy Swamp appears to have various Precursor artifacts, though scarce compared to other locations and buried beneath the sludge and silt of the swamp. It is subject to continual rainfall and is home to a heavy concentration of swamp rats, as well as other notable lurker species such as swamp bats and lurker toads.

When the lurkers infested Boggy Swamp, under the control of Gol and Maia, they discovered part of a ruined Precursor robot. In an attempt to dislodge the artifact, they stationed a dirigible over the swamp, anchored by four large boulders scattered throughout the land connected by cables, with one of the cables tied around artifact, attempting to pull it up with the lifting power of the balloon. When Samos Hagai discovered this, he tasked Jak and Daxter with dislodging each of the tethers from the anchors to send the dirigible astray.

After finding the flut flut and traversing across the hazardous tar, Jak found Boggy Billy. The swamp resident informed the duo that he owned the swamp and that ever since the lurker invasion, his pet hip hog named Farthy had been scared away. He placed the hip hog's "favorite snack" out in front of his small shack in hopes of luring him back, though the swamp rats continued to eat the snacks. He then asked Jak to protect Farthy's snacks from waves of rats using yellow eco. After Jak succeeded, Farthy returning to his owner, Boggy Billy gave him a power cell.

Boggy Swamp is located west, north west of Rock Village, across the bay. It is dominated by marsh, including sludge and thick, hazardous tar, as well as large thorns and wooden stakes. It also has a network of caves with torches placed throughout them. These caves are most commonly home to dark eco boxes, swamp rat nests, and blue eco. Throughout the swamp, platforms such as wooden scaffolding and poles must be traversed to overcome the hazardous environment. Primitive traps, gates, and other construction can be found surrounding lurker concentration. There is an unexplained docking station at the coastline just ahead of Boggy Billy's hut. 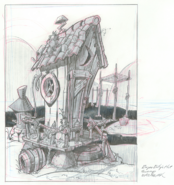 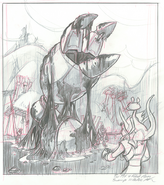 Concept art of the robot's arm