Brink Island is a location in The Lost Frontier. It is a Brink location, hence its name, and technically consists of two islands as well as the surrounding domain. The location was featured prominently only in the beginning of the game, but could still be visited via the Phantom Blade afterwards. It was also home to two volcanoes, only one of which was ever visited.

Before The Lost Frontier[edit | edit source]

When Phoenix, leader of the Sky Pirates, decided to rebel against the Aeropans, he kidnapped the chief scientist of their Dark Warrior Program, Tym. He marooned him on Brink Island, and amid the scuffle the scientist took a blow to the head, inflicting amnesia. Despite this, he was able to build sawbots to help him acquire lumber and build a treehouse, and continued to build the tripodbots which he had previously planned to use to take back an Aeropan facility by force.

Eventually all of his robots, including a very large and powerful one called the Uber-Bot 888, turned against him, requiring Tym to barricade himself behind wooden fences and a laser barrier. At one point, Tym tried to build the Jaguar to get off the island, but had to scuttle the plane due to poorly self-refined jet fuel. Tym's only hope of getting off the island came in the form of Jak, who he would meet later.

Brink Island is first featured in the opening sequence of the game, serving as the emergency landing site of Jak, Daxter, and Keira's Hellcat after a scuffle with sky pirates Phoenix and Klout. Jak proceeded to explore the smaller island, fighting off armadillos along the way, resulting in the discovery of a rare type of prism-like green eco crystal. Thereafter a sky fight ensued in the skies above Brink Island, wherein Jak fended off pirate fighters who were ambushing the Aeropan ACS Behemoth.

Shortly thereafter Jak and Daxter returned to the Brink Island skies, chasing Phoenix who had nabbed the eco seeker as well as Keira, and had taken off in his specialized Sky Raider. The chase ended in another pirate ambush, causing Jak to crash land on the larger of the two islands, prompting him to look for a way off the island, fighting the new sawbot and tripodbot enemies along the way. The journey ended in Jak's discovery of Tym, who told him he would need to retrieve the velonium power pod in order to get his plane working again. However, there was only one on the whole island, belonging to the Uber-Bot 888, but Jak set out to retrieve it anyway.

Returning to the skies, Jak proceeded to shoot down the Sky Pirates' galleon, christened the Phantom Blade. He was afterwards allowed to board and reunite with Keira. However, remaining tensions between Jak and Phoenix caused a scuffle resulting in the loss of the eco seeker through the window and down to the Brink volcano. Keira forced a truce between Jak and Phoenix until it was retrieved. The two men thus made it a race to see who could get it first. Afterwards Jak did not have reason to return to Brink Island, though he could still set sail there if he wanted to after becoming the Phantom Blade's official helmsman.

Brink Island is located along the literal edge of the world, consisting of a very broad cataract (presumably the sea floor) dumping into an endless abyss blanketed with thick clouds. The unfinished mountains revealing large Precursor architecture, in combination with the Precursor architecture used to support the individual islands themselves, betrays the premature abandonment of its construction.

The area itself primarily consists of a large island (which is technically two islands, one smaller and one much larger), three major mountainous structures, and one mysterious tower presumably built by the Precursors. The smaller island, home to the first mission in the game, primarily rests on solid earth. It possesses a smaller volcano that was never actually visited. The larger island (home to Tym's treehouse) connects to the small island by way of only one small wooden bridge, which is broken but can still be traversed via jumping. This island is considerably larger, and is home to the Brink volcano. It is supported by structures built of Precursor metal, as it does not rest on solid earth but instead above the cloudy abyss.

Tym's treehouse also serves as a hub for access to all other areas of Brink Island. You can land on Brink Island via a hangar which connects directly to Tym's yard. From there are wooden signs with black paint indicating each of the areas, pointing to gates and doors. North-west of Tym's treehouse is a door to the volcano; west is a path to the Uber-Bot 888 area; south is a door to a cave leading to the smaller island; south (but east of the cave) is the site of Jak's second crash landing, but access to it is located north-east of the treehouse.

The tower appears to serve observatory or communication purposes, possessing a large, spinning satellite and several spires and platforms. Throughout the game an Aeropan gunship is seen surveying the structure, one which is uniquely equipped with a machine gun weapon for semi-defensive use. Opposite this tower is a tarmac-like wooden structure with a small house near the end. Due to this being where plane races start and where Dirk Hardpeck flies, it is presumed to be his home. Lastly, one of the many smaller islets is home to a large Precursor statue, and is situated on solid earth south of the minor island. This statue will reward Jak for destroying dark eco crystals and bringing back their energy (see The Lost Frontier side missions).

In the final game, the smaller island was raised off of the sea level slightly, did not have a beach and was not a jungle. 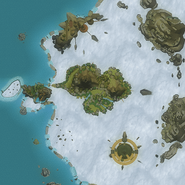 A map of the entire Brink Island area. 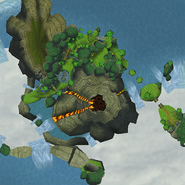 A map from the mission "Find green eco fuel". 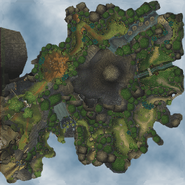 A map from the mission "Look for a way off the island". 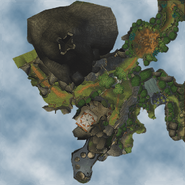 A hub map from Tym's treehouse. 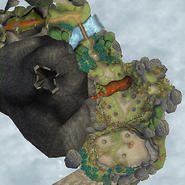 A map from the mission "Retrieve velonium power pod".
Add a photo to this gallery
Retrieved from "https://jakanddaxter.fandom.com/wiki/Brink_Island?oldid=135228"
Community content is available under CC-BY-SA unless otherwise noted.