Buggies are specialized vehicles that were used by Spargus citizens (specifically Wastelanders) during Jak 3. Similar to race cars, unlike the anti-gravity technology encountered in standard vehicles such as zoomers, airships, and other aircraft, these vehicles rely on four rugged wheels for traveling through the vast Wasteland terrain. They consist of an open chassis built of steel framing, mounted with engines, boosters, seating, and weapons.

All buggies (with the exception of the Tough Puppy) are equipped with on-board weapons, typically submachine guns, though in some cases (Dune Hopper, Dust Demon) use grenade launchers similar to the one seen in the Plasmite RPG. They also come equipped with turbo boost technology, the reserve of which can be charged with booster pick-ups dropped by destroyed marauder buggies, as well as in certain side missions. They also have jump jet capabilities, allowing their drivers to perform a small hop on command (though in the case of the Dune Hopper, the jump reaches incredible altitude).

The secrets menu offers a variety of buggy-specific secrets for purchase. 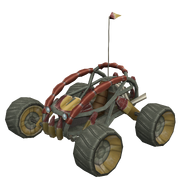