Dark Jak is Jak's dark alter-ego seen in Jak II, Jak 3, and for a brief moment during The Lost Frontier. After being subjected to two years of dark eco experiments under the Dark Warrior Program at the hands of Baron Praxis in Haven City, Jak gained highly destructive powers coupled with high durability and strength, which he learned to control by help from an oracle in the Water Slums. Later in Jak 3, his dark form was matched by a light form which helped him balance his dark powers even further.

When Jak and Daxter arrived into the future, Jak was captured by the Krimzon Guard. Experiments were then conducted on Jak in an attempt to create a "supreme warrior" to use against the Metal Head armies. These experiments spanned two years, during which Jak was tortured by being injected with dark eco via the dark eco injection chair. Onin revealed to Erol, the commander of the Krimzon Guard, that Jak had special abilities, and they therefore put forth their efforts into transforming him.

Eventually Jak was deemed a failure, and he was set to be executed by Erol. As the corrupt ruler and commander walked away from the injection chair, Daxter came to free Jak. He then first released his dark nature, breaking free of the restraints in his chair and at first did not recognize Daxter and attempted to strike him, though eventually recognized his friend and returned to his original form. After prison break, the two met Kor and a kid outside in the Slums sector of Haven City. A squad of guards approached them, stating that anyone in that sector was thereby under arrest for suspicion of harboring Underground fugitives. Jak transformed into his dark alter-ego and destroyed the guards, rescuing the elderly man and the kid. Kor then directed Jak to the Underground movement, citing that they could use fighters like Jak.

Thereafter Jak could use "Dark Jak" any time his dark eco meter was full. Jak could collect dark eco droplets from enemies which he destroyed, and could also find them in crates. Jak learned special attacks and control over his dark form by returning skull gems to an oracle in the Water Slums. The oracle would inject Jak with a bolt of dark eco, allowing him to use new dark powers such as Dark Bomb and Dark Blast, among others. If you morph into Dark Jak at any time in Haven City, the Krimzon Guard will panic and set off the alarm, which will start at elevated and will become major if Jak morphs into Dark Giant.

Towards the end of the game, during the final bossfight with Kor, Jak quickly channeled his Dark Jak form to avoid being crushed by the collapsed platform after Kor blasted away the surface on which Jak and Daxter were standing. This displays Dark Jak's apparent tougher, more durable nature.

In Jak 3, Jak could now use Dark Jak at any point during the game, as long as his meter was at least partially full, opposed to having to max it out in order to channel it (however some powers are rendered unavailable if the meter does not reach a certain point).

Jak inadvertently transformed into Dark Jak during his first Arena of Death battle, allowing him to win the challenge. Damas, king of a refuge desert city named Spargus, became intrigued by Jak's dark powers and concluded that Dark Jak could be useful for the city.

Seem, the leader of the Precursor Monks, witnessed Jak's transformation into Dark Jak during the arena challenge and immediately became wary of Jak. Seem continued to be hostile towards Jak during their first few encounters due to Dark Jak's presence.

Jak would later gain more dark eco powers as the game progressed in addition to those collected in the previous game, such as Dark Strike and Dark Invisibility. When Jak obtained Light Jak he gained more control over Dark Jak,

When Damas died Veger mockingly taunted Jak about how he was the one who kidnapped Jak when he was a child and that Damas never figured out that Jak was his son. Jak angrily lashed out at Veger, transforming into Dark Jak for a moment.

In the opening cutscene of The Lost Frontier, Jak attempted to transform into Dark Jak while in a confrontation with Captain Phoenix. However, his transformation failed due to the instability of eco during the massive eco storms caused by the eco shortage, making an attempt excruciatingly painful. It was then decided that Jak could not use his darker alter ego while at the Brink, and his powers were substituted with eco powers made available to him through Keira's sage experiments.

While channeling Dark Jak, Jak's skin complexion becomes a light gray with a slight purple or blue tint, his hair grows slightly longer, shaggier and spikier, and becomes a darker gray, with his goatee looking somewhat darker, and his eyes grow completely black. He also grows large, black claws, and during Jak II grows a pair of large, black horns, which do not appear in Jak 3. This is presumably due to the balancing effect of light eco, though the horns later reappeared in the beginning of The Lost Frontier. Additionally, sharp, brief purple bolts can be seen spewing from his body at random intervals (which can affect others around him especially whenever he attacks with melee moves), and he can be seen with a very aggressive posture, with his claws open and heavy breathing patterns, with a hostile and somewhat feral facial expression and behavior. 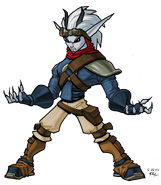 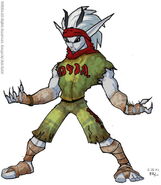