The Dark Warrior Program was a large-scale experiment conducted twice during two separate events by Baron Praxis and Duke Skyheed, the leaders of Haven City and Aeropa, respectively. The programs entailed the research of dark eco with the goal of turning ordinary citizens (Haven citizens and Aeropan citizens) into elite dark warriors as a means to combat opposing forces. Both programs utilized dark eco-injecting machinery, with which a subject would be restrained to a chair while a number of large needles administered currents of dark eco through him or her.

While the Aeropan project was never referred to as specifically the "Dark Warrior Program" (instead a "secret weapons program to create a new class of warrior"), its intents and technological means were the same as Haven's, thus it is referred to as a dark warrior program.

The first Dark Warrior Program was conducted in Haven City under the direction of Baron Praxis to help finish an ancient war against the Metal Heads. In the opening cutscene of Jak II, Jak was captured by Erol, the commander of the Krimzon Guard and the Baron's deputy aide, along with a squad of guards. Over the next two years, Jak was kept as one of five prisoners who were the subjects of the Dark Warrior Program. All of them died except Jak.[1] Each of the experiments took place in a "torture chamber" of the fortress.

However, the Baron eventually deemed the program a failure after Jak's bio-readings remained "nominal and unchanged" following supposedly fatal injections. He did not realize that Jak was successfully altered and obtained his Dark Jak form as a result. The reason for Jak's survival in contrast to the other prisoners is presumably because of his ability to absorb and channel eco. Either way, he is the only known successful Dark Warrior that Haven produced, and the only known one in existence until later in the series. 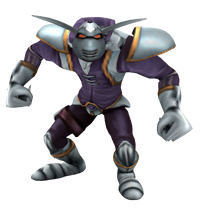 Another Dark Warrior Program was enacted by Aeropa to create a "new class of warrior" for a war they were losing against an unspecified enemy. The commander of the Aeropan Air Forces, Phoenix, was put in charge of the program, though he was unaware they were to be experimenting on innocent civilians. The program's chief scientist, Tym, was behind the experimentations, as he himself was a sage of dark eco. He had been operating at the Aeropan barracks, which served as the program's first main facility.

Tym began to realize the lapse in ethics of what he had done, and began building warbots (namely the tripodbot) as an attempt to take the facility back by force. Meanwhile, Phoenix attempted to persuade the leader of Aeropa, Duke Skyheed, to stop the program, but was unsuccessful in doing so. So Phoenix took matters into his own hands and kidnapped Tym, not realizing that Tym was trying to stop the program as well. Phoenix mentioned there was a scuffle which led to Tym taking a blow to the head, giving him amnesia and presumably knocking him out during the struggle. It is thus presumed that neither individual was aware of the others' rebellion against the program, where the misunderstanding that led to the physical struggle occurred.

Phoenix went on to form the rebel faction known as the Sky Pirates which began warring with Aeropa, as Phoenix swore he would destroy the Aeropans. When he met Jak and observed his attempted transformation into Dark Jak, Phoenix mistook him for an Aeropan experiment and tried to kill him on several occasions. But when Tym regained his memory later in the game, he reasoned with Phoenix that Jak represented that dark eco can be controlled, or at least managed, and thus Jak and Phoenix teamed up to destroy the Aeropans.

Despite this, the Aeropans were ultimately successful in mass producing dark warriors, including Aeropan commandos, gladiators, and ethereal sub-commanders. This army later went on to be destroyed, as Phoenix and Jak were successful in destroying Duke Skyheed, who himself had transformed into a dark monster. This, however, ultimately led to Phoenix's death, who had sacrificed himself to kill Skyheed.

Over the course of the game, Jak encountered several non-human dark eco mutants, which were presumably either byproducts of dark eco exposure or were experiments during non-human trials themselves. Due to the absence of Tym, it is presumed that adjunct Aeropan scientists had to continue experimentation, and were responsible for the mutants found at the Aeropan research rig, which was abandoned evidently due to the freed dark eco experiments running rampant throughout the facility. These included franken apes and dark ghoul spiders, though there were also dark armadillos found in more official deployment at the Aeropan barracks.

The similarities between Haven and Aeropa's machinery are blatant, but it remains an unconfirmed coincidence. While no form of contact between Haven City and Aeropa was implied, nor is there any reason to believe such actions took place, there is no clear reason as to why these similarities exist. The success of the second program over the first may be attributed to Tym's involvement, however. Aeropa was successful in mass-producing combat-effective warriors, while Haven's only produced one who saw to the program's eventual downfall.