An eco vent is an exit point connected to ancient Precursor pipelines which freely releases concentrated sources of eco. They are spread throughout the world during the Jak and Daxter series and dispense all different colors of eco. During The Precursor Legacy, blue, red, green, and yellow eco vents were featured and would give Jak a full gauge of eco power. Eco vents did not appear again until Jak 3 and only featured dark, light, and green eco, for some reason the green eco vents were not visible but instead covered up by a small pile of rocks, the eco also flowed out in a spiral twister pattern. In The Lost Frontier, colored eco vents reappeared and would allow Jak to use his eco powers. All vents that have Precursor writing on them translate to "power".

Eco vents can be capped as well, such as with a large pile of rocks as seen in the "Unblock the eco harvesters" mission in which Jak had to unblock some eco vents which Samos Hagai used for harvesting green eco. Capped eco vents can only be opened by switching the relevant vent switch back on, although only the blue and yellow vent switches were encountered at respectively the Forbidden Jungle and Snowy Mountain. 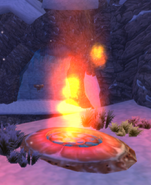 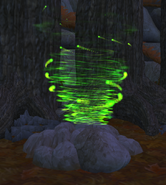