Jak and Daxter Wiki
Register
Don't have an account?
Sign In
Advertisement
in: Sky Pirates, Locations in The Lost Frontier

31 (locations)
Far Drop is a location in The Lost Frontier. It was notably the home to Barter, a smuggler who served as the primary custodian of the town. Far Drop significantly served as a refuge to pirates and smugglers alike, having flown under the radar for most of its history. As such it was quite connected with the Sky Pirates.

Far Drop is a rather primal village built along the back walls of a large cave known as Pirate's Cove, which is situated along the edge of the Brink. The entire city is built from wooden structures and metal scaffolding, and its economic mainstays include frequent low-level passers-by, a docking crane, a power plant, a cabbage farm, and a bar. It also features an orphanage, though the cause of its necessity remains unknown.[a]

Little is known of Far Drop's early history. Its location had remained hidden from the Aeropans for most of its existence, allowing it to be a safe zone from Aeropan hostility.[1] When Phoenix rebelled against the Aeropans, he became close with those in Far Drop, and presumably recruited his pirates from there. A statue in the likeness of Phoenix was also erected downtown. At some point, a relatively intelligent lurker named Barter became the de facto leader of the town, describing himself as the "top dog" around Far Drop. He either founded or became the owner of several establishments and structures, including a tavern, an orphanage, a cabbage farm, the crane at the docking station, and the town's power station.

Jak first visited Far Drop by the request of Phoenix, who asked him to retrieve supplies for their coming voyage. Upon arrival, Jak met Barter, who told him he would need to defeat the mutant apes that had shown up a few months prior and had been tormenting the town since. Jak agreed and completed the task, though afterward Barter requested that he complete an additional task for scrap, involving Jak instigating a bar brawl to "liven up" the tavern, to which he obliged.

Later on, Jak and Keira discovered that their eco seeker needed a set of coordinate spheres to operate, one of which was located at Far Drop. When Jak arrived at the tavern, Barter directed him toward the Saucy Pirate, who had the coordinate sphere in a glass bottle. She agreed to part with it only via a duel, with Daxter himself being Jak's wager, who the female pirate noted would make for a nice fur coat. To Daxter's vexation, Jak agreed, though he ultimately bested her in the ensuing boss battle.

Jak lastly visited Far Drop after the Aeropans discovered its location and laid siege upon the town. Shock troops of Aeropan commandos, gladiators, and sub-commanders fronted the incursion, ravaging and all but razing the primal village. Fortunately, Barter devised a plan to save the town, which involved employing Jak to carry out an attack on the Aeropan dropship with a bomb stolen from the Aeropans.

The "master plan" was completed successfully, though the shock troops were followed by an Aeropan air assault in Pirate's Cove. Jak swiftly provided air defense, with the Aeropans carrying out air strikes with heavy fighters and attempted laser strikes with the ACS Behemoth's new dark eco weapon. Although Jak ultimately stopped the Aeropans, Phoenix relayed that the siege went badly, and that he lost many friends in Far Drop, prompting a retaliatory siege on Aeropa.

Far Drop is a rather primal village built along the back walls of a large cave known as Pirate's Cove.[2] A network of several huts and other structures can be found littered across the cave wall, though they do not appear to be connected. Jak and Daxter were known to use aeropults several times to access these unconnected locations. While ordinary citizens were never observed to use them, the frequency in which the aeropults appeared throughout the town could suggest the launching devices were common modes of transportation (and they were indeed known to be used by the town orphans).[3]

There is a small wooden runway in front of a small hangar which allows inside access to the town. To the left of the runway is a large water wheel, which is also visible from inside the town. Elsewhere in the cove includes a pirate radio tower to the east, a Precursor statue at the mouth of the cove, and several dark eco crystals throughout the area. Beyond the cove is a collection of Precursor structures, around which a piece of the Jaguar can be found.

Most of the village consists of wooden structures and metal scaffolding, embedded within the natural material inside the cave. There are several small huts reminiscent of the lurker huts at the lurker village from Jak II. Other common elements include rice paper roofs and lampshades, indicative of the town's stereotypical "pirate" theme.

Following the hangar is a short introductory area, with the loading docks and a large crane to the left, and large shipping containers to the right. Ahead of this is the main square which mainly consists of huts, but also includes access points to other areas in the city. Placed in the center of this area have been two large golden statues, the first resembling Phoenix, and the second one resembling Jak and Daxter (replacing the former after its destruction).

Of note is the addition of several metal gates and other steel structures during the siege, which influenced Jak's path of travel different from the first mission. The layout of the town itself remained the same nonetheless, though some parts of it were destroyed or rendered inaccessible due to debris blockage. Most notably, all but the north east paths in the main square were completely blocked after returning to the town following the siege.

To the north east of the main square are a few wooden bridges that lead toward Barter's tavern. During the siege, all of the bridges were destroyed, requiring Jak to traverse various gaps throughout the town with floating platforms. However, the bridge leading to the tavern formerly crossed over a stream, thus Jak navigated the stream instead of a platform, using the eco shield power. Notably, this stream led Jak around the back toward the tavern, whereas the bridges lead to the front.

The tavern itself is considerably small, with a service bar to the right of the entrance, and a large stage opposite of the entrance. In between are several small round tables with four chairs. Other bar decor includes neon signs, pirate flags, and large wooden kegs, some of which pour endless amounts of beer into a small beer moat surrounding all but the entire interior. There is also a small VIP dining area on the opposite side of the moat, though this is never seen to be in use. One other particular characteristic of the bar is the revocation of firearms, leaving Jak with nothing but a melee club in the Gunstaff.

Outside of the bar to the north west is an aeropult. This launches Jak in a south-facing direction; toward the power station. This station consists entirely of metal scaffolding, with large arcs of electricity in between the corridors at certain points. Green eco crystals are present in these areas, allowing Jak to use his eco construct power to avoid getting shocked. At the end of the power station is the main control room, which contains several computer monitors and other terminals. There is notably one entrance to a smaller portion of the station, which was used by Daxter via an eco shield/hamster ball segment.

To the west (or, to the right upon entrance of the control room), are a series of fast-moving platforms that must be slowed down with eco reflexes to traverse (for which there is a Precursor idol upon first visit). Once traversed, there is a small island that allows access back to the main square via eco rocket jump.

To the south west of the main square is a very long wooden bridge that leads to the town's cabbage farm. It consists of a stretch of metal segments situated along the wall of a cave, with wooden planter boxes along the outer edge. They only contain cabbage, for which voltaic eels are common pests. At the end of this is another series of rapidly-moving platforms, following which is another short row of cabbage boxes, following which is an aeropult, which launches Jak back to the main square.

During the siege, the south west area was visited in order to access the Aeropan dropship, which was docked near the cabbage farms. Daxter notably utilized the inside of the farm structure during an eco shield/hamster ball segment.

To the north of the main square is a small room with two large metal platforms, one of which rapidly moves up and down. During the siege these two pieces of machinery were completely destroyed, and the area was instead used to access an aeropult that would launch Jak toward the Aeropan dropship.

During the first mission, however, the moving platform could be slowed down enough with eco reflexes to reach a higher cave level, notable for its platforming challenges. Firstly there are a series of extremely sensitive teeter-totter platforms, which may sometimes require the deployment of eco reflexes. Between these platforms are more rapidly-moving platforms like those found in the north east side of town.

Following this area is the town's orphanage, consisting of a housing complex, a hop-scotch game on the ground, a tether ball and pole, a basketball hoop, and most notably an aeropult in the back. This one launches you back to the main square.

Concept art of the main square. 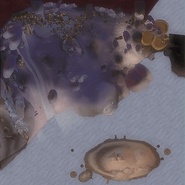 A map of Pirate's cove. 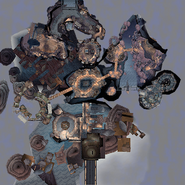 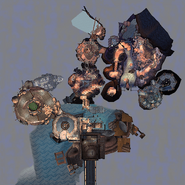 A map of Far Drop during the siege. 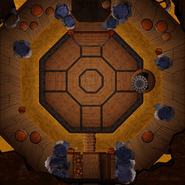