Jak and Daxter Wiki
Register
Don't have an account?
Sign In
Advertisement
in: Locations in The Precursor Legacy

Gol and Maia's citadel is a location in The Precursor Legacy. It is a large tower of Precursor origin, home to Gol Acheron and his sister Maia where they constructed their Precursor robot. It is guarded by several lurkers, and is composed of various platforming challenges and facilities dedicated to different functions.

As Gol and Maia kidnapped the Blue Sage, Red Sage, Yellow Sage, and eventually the Green Sage, they imprisoned them in chambers at their citadel, located at the Yellow Sage's ruined hut. The chambers were placed at the end of different rooms in the citadel which Jak and Daxter had to traverse in order to free them. The citadel stored Gol and Maia's Precursor robot which they planned to use to open the dark eco silos around the world.

In the final cutscene of the game, a large Precursor door is opened by the one hundred power cells collected during the game. In Jak II, it is revealed this is the Rift Rider and Rift Gate.

The citadel is only accessible after travelling through Lava Tube, north of the Red Sage's hut in Volcanic Crater. The citadel's entrance contains a long hall which leads to a vast room with spinning platforms, wooden scaffolding, dropping tiles, and various other platforming challenges, with a large Precursor robot protected by a shield at the center of the room. The entire citadel consists of seemingly gravity-defying or vastly tall structures, with every platform descending down to an endlessly pitch-black chasm. The remaining functioning Precursor technology within the citadel appear to be tinkered with and patched using identifiable lurker technology. There are three different compartments within the citadel accessed via differing platforming challenges, each room leading to a cage containing one of the sages.

The chamber leading to the Blue Sage opens to a large assembly line-style factory within a massive stone cave. It contains large structures and floating platforms, and along various assembly lines appear to be devices which go through a torching process. The Yellow Sage's room, located on the other side of the citadel, consists of a large room with a large amount of floating launchers. After traversing them, a door opens up to the Yellow Sage's cell.

The Red Sage's area follows a large hallway in which a large citadel bunny ambush takes place. This hall is preceded by a relatively long platforming challenge, starting with large spinning platforms which are cut out in fractions, which then leads to the room consisting of dropping floor tiles.

Lastly, the Green Sage's chamber is not accessible until freeing the other three sages. After freeing the third sage, a long line of floating platforms rise from the chasm floor, leading up to the top of the area which contains the Precursor robot in the center. A large rotary of variously-pitched platforms connect to the main scaffolding system which leads to the final scout fly box and lastly the Green Sage's chamber.

Just after the Green Sage's chamber lies a large elevator, which leads to the very top of the citadel. After reaching the top, a floating platform will bring Jak to the dark eco silo nearby. It is also here where Jak and Daxter unlock the large Precursor door.

The shield generator for the Sage's cells 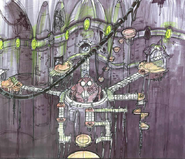 Concept art of the citadel
Community content is available under CC-BY-SA unless otherwise noted.
Advertisement