Side missions are optional missions in Jak 3. They are accessed either via from oracle totems in Spargus, the Wasteland, and some parts of Haven City, or from computers set up by Kleiver and Torn for their own challenges in the Wasteland and Haven, respectively. After unlocking a mission you can simply walk up to the computer or statue and press

to begin the side mission, assuming you are not in another mission. They also need to be paid with skull gems to be able to play the mission. All the orb searches cost 4 gems and reward 3 Precursor orbs, the different races all cost 8 gems and reward 10 orbs, while the few unique missions in the "Others" section (and some minigames) cost 12 gems and reward 18 orbs in total. 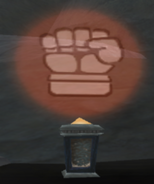 An oracle totem
Community content is available under CC-BY-SA unless otherwise noted.
Advertisement