After talks of and subsequently abandoning a reboot of the Jak and Daxter series with a Jak 4 title, Naughty Dog commissioned Mass Media Games to port three of the first games to the PlayStation 3 with "higher resolution graphics and 3D support,"[1] as well as PlayStation Network trophy design and implementation. Mass Media acknowledged the challenge of undertaking the project, stating "Looking under the hood, yes, it was a surprise to see that much code," says Robert Toone in regards to remastering the series. "I was there, sitting next to the programmer, helping him figure out what kind of clever algorithm Naughty Dog had come up with. [...] You gotta figure out how they did all this 'multi-layered, multi-textured rendering'. Ugh. Brilliant. But, troublesome."[2] Mass Media creative director Paul Mithra stated that Naughty Dog "told us from the beginning that this is an impossible project," admitting that "it wasn't long before we agreed with them."[2] Nevertheless, the game was finished with minimal bugs, as well as a few improvements aside the HD reformatting and PlayStation trophy support.

Speculation of a Jak and Daxter Collection release began in May 2011 when a "source connected to [Naughty Dog]" hinted that a "dark, dirty and dangerous" collection was in the works.[3] Furthermore, in October 2011, a South African online retailer known as BT Games had a Jak and Daxter Collection listed early for a January 2012 release.[3] A week later, Justin Richmond, a Naughty Dog employee, confirmed the creation of the Collection, though Sony did not comment.[4] On 24 January 2012, Naughty Dog President Evan Wells formally announced on PlayStation Blog the Jak and Daxter Collection for a February 7 release in North America, "complete in one Blu-ray package" and with "100+ trophies to collect."[5] The Jak and Daxter Trilogy was also later released on 22 February 2012, and 8 March 2012 in the Australasia regions. On 19 April 2013, European Sony PlayStation producer Victor Harris announced that the Collection would be released in June 2013 for the PlayStation Vita as well.[6]

The Jak and Daxter Collection was met with positive reviews from critics. Game Informer noted that "Though some aspects of the games are dated now, the Jak games still stand up as epic adventures," stating that "the series was driven by a restless sense of innovation," praising "Naughty Dog's work in this franchise for creating great characters, finely tuned gameplay, and an unceasing inventiveness," and felt "the Jak games stand up as epic adventures."[11]

Eurogamer offered praise for "three of the most interesting platformers of the 21st century." They maintained that they "may not be as solid a platformer as Sly Cooper and its gunplay isn't as refined as Ratchet & Clank's – but in terms of ambition, invention and grandiosity, it remains leagues above its last-gen platforming brethren." They regarded the games as a "fascinating document of the evolution of the action adventure; its heroes are unstuck in time, without a genre to call home. No series has been so willing to switch gameplay styles with such reckless abandon", and concluded "the Jak represents a shining example of what happens when a capable developer takes a huge risk."[12]

IGN gave the disc and series as a whole a glowing review, and with a score of 9.0, noted that if one missed the first round of Jak and Daxter, "You missed three of the best action platformers of that generation," and felt that the series' "huge worlds, memorable characters, action packed stories, and great gameplay, all without loading screens," was and still is "damn impressive." However, they also acknowledged that "while the Jak series feels a bit like a carry over from a genre that this generation has mostly abandoned, it stays fun, fast paced, and beautiful," adding that "As a gamer who likes to relive some of my favorite games, I find the HD collections to be an awesome way to get rewarded for nostalgia."[13]

Despite these positive reviews, the Collection did not fare well with both critics and fans on the PlayStation Vita port. A Metacritic review said "It's just a shame the genre-defining original is such a frustrating title to play on Vita, the second is so impenetrably hard, and the third a little unfocused."[14] Many felt that due to the Vita's small screen, a game originally developed for on-screen PS2 play felt too compact and the controls too clumsy.[14] Another primary complaint is that the frame rate for The Precursor Legacy was noticeably slower. Digital Chumps felt that "It's no surprise that the Vita release of Jak and Daxter Collection is noticeably inferior to its console counterpart. The problem is I'm referring to both the PlayStation 3 and PlayStation 2 versions of each game. What the Jak and Daxter Collection gains in portability to loses in playability — a compromise that, even for games as objectively great as these three, is tough to reconcile."[14]

IGN felt that the PlayStation Vita was "the worst way to play these games," stating that "Immediately upon starting up the Vita collection, there's some disappointment. The port to the Vita has left the Jak series feebled. The whimsical and beautiful Jak 1 suffers from frame rate issues all throughout, as does Jak 3 during numerous spots. The middle game performs alright technically, but that's because the entire game runs at a lower frame rate than the PS3 versions. In fact, the Vita ports often look worse than even the PS2 versions. Not terrible, just third best... out of three. So... the worst," giving the port a final score of 6.8.[15] The same review was headlined with "Jak and Daxter Get Deported" and Destructoid headlined their review with "A Naughty Port".[16] 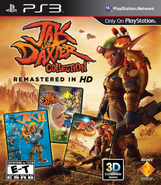 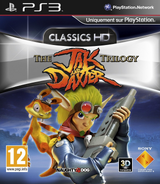