The KG Death Bots,[1][a] also known as the KG Robots,[3][4] are a faction in Jak II and Jak 3. Originally a division within Baron Praxis' despotic Krimzon Guard in Haven City, they eventually splintered and reorganized under Errol, starting the War for Haven City.

As an apparently experimental division within the Krimzon Guard, the KG Death Bots were headquartered and produced at the weapons factory just outside the city. Up to this point, they included only the spydroid, roboguard, blast bot, security tank, and robot guard, with the former two being in prototype form. After Praxis was killed, the Krimzon Guard dissolved and was replaced with the more benevolent Freedom League. However, the KG went out of control and reorganized under Errol, the former KG commander who was thought to have died, and moved production to the floating KG war factory above the city.

The KG Death Bots were now made up of more units, with a more developed roboguard unit with firearms, and new spydroids were developed, which were the same as the prototypes but did not use electric shock. New units of KG Death Bots included the hover guard, hopper bot, robo-goon, sentinel, and blade beater, many of the units bearing close resemblance to metal head species, possibly sharing design as the existing metal head groups were allied with Cyber Errol.

When the KG war factory was shut down by Jak, production of KG death bots decreased. When Cyber Errol, while in a terraformer, was killed by Jak in the Wasteland, the KG Death Bots died off. The only surviving KG death bot was an elite unit not seen in the war known as UR-86, and partook in the Kras City Grand Championship in Jak X: Combat Racing one year later.

The KG Death Bots had insignia and other themes very similar to the former Krimzon Guard: the emblem was the same but was split into two sides, and though the purpose for the color scheme and design change is unknown, it possibly represents the concept of "cyborgs"; one side representing cybernetics, the other representing organisms. Another emblem associated with the KG Death Bots was a desaturated version of the Krimzon Guard logo, and was used on KG Death Bot crates only.

All KG Death Bots carry crimson armor with a partially visible metallic skeleton, often completely revealed with the bot's armor is shot off.

The KG Death Bots were developed and produced at the KG war factory. They were deployed in Haven City where they concentrated and occupied the Industrial Section, and for a short while New Haven as well. KG Death Bots were also found beneath Haven's streets in the Haven sewers.

The KG Death Bots used weaponry similar to the former Krimzon Guard artillery. They primarily used long-range blasters firing a red bolt of energy, which was both powerful and reasonably fast. The blast bot and sniper cannon also used laser blasters, though these were the only examples. The KG Death Bots also used various forms of bombs, including mobile armored bombs, missiles, and various other explosive devices.

They didn't use many vehicles aside from KG fighter jets, a cargo transport, and a factory car at the war factory. 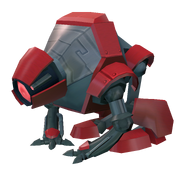 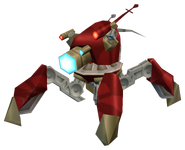 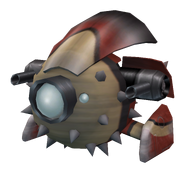 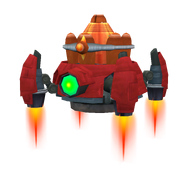 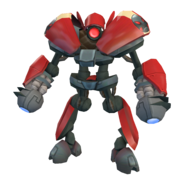 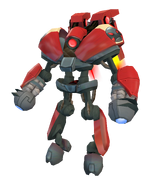 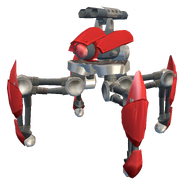 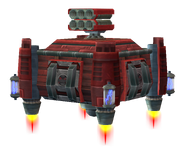