Klout is a support character and eventual foil character in The Lost Frontier. Introduced as the first mate on the Phantom Blade and right-hand man to Sky Pirate leader Captain Phoenix, he served as the muscle of the pirate crew until his betrayal in favor of cash paid to him by the Aeropans, shortly before his death.

Klout is a very large, heavy-built man with a rough, muscular appearance. His head is bald, though he does possess unidentifiable decorations along his scalp and eyebrows. Both ears are cut off, a trait shared by only one other character in the series, Shiv from Jak X: Combat Racing. He wears a thick blue jacket with cut off sleeves and a pronounced collar, with suspender straps connected to a thick utility belt around his waist. He also notably wears shoes identical to those of Phoenix.

Klout is first seen in the opening cinematic alongside Phoenix during their seizure of Jak, Daxter, and Keira's Hellcat airship. He appeared very big and threatening, but left Jak to Phoenix while he focused on Keira. Before Klout could attack her, Keira sharply rolled the craft, causing Klout to fall off, saved by one of the tethers.

Klout is later seen when Jak boards the Phantom Blade, intercepting Jak on his way to see the Captain. When Jak asks about Keira, Klout incitedly stated she was being "entertained" by Phoenix, just before Jak threw a punch which was easily stopped by the pirate. He proceeded to grapple Jak and throw him into the arms of nearby pirates, easily overpowering the protagonist.

When Jak and Phoenix began establishing a working relationship, Phoenix began being "too generous" to the group, according to Klout. He made it very clear, however, that he still did not like them, begrudgingly carrying out Phoenix' orders concerning them and saying they will get no discounts from him. Phoenix even went so far as to say Keira is "first mate material", leading to resentment toward Phoenix and the group. This resentment became secondary, however, during their skirmishes with the Aeropans.

Their battle with the Aeropans particularly intensified after the pirates' invasion of the Aeropan barracks. The Phantom Blade was caught in the sky, targeted by the barracks' defense system. Klout was left to man the galleon, giving status reports and commanding the deck hands, thus fulfilling his duties as second-in-command, as Phoenix was still down at the barracks.

At some point, Klout was contacted by Duke Skyheed of the Aeropans, and was persuaded with money to betray Phoenix (though it likely also had something to do with his aforementioned growth of resentment, saying "When a Captain's gotta go, he's gotta go.") After promising to prepare the Phantom Blade crew for their excursion to the eco core, Klout met with the Aeropans and followed Phoenix, Jak, Daxter, and Keira into the core. At gun point, Klout revealed his betrayal, stating he was "old fashioned". At this point, Keira activated the giant eco crystal, creating a shockwave of dark eco that brought Klout to his death. 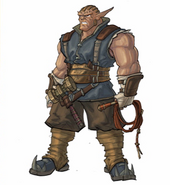 Concept art of Klout.
Add a photo to this gallery

Retrieved from "https://jakanddaxter.fandom.com/wiki/Klout?oldid=136381"
Community content is available under CC-BY-SA unless otherwise noted.