Light Jak is Jak's light alter-ego seen in Jak 3 and briefly in the final battle cutscene in The Precursor Legacy. Jak was given this state to balance his dark form as a gift from the Precursors, with different light powers being obtained by gift of an oracle (typically seen at Monk Temple) and once by a Precursor projection. This form gives him defensive and regenerative powers, inverse to his destructive and combative dark eco powers.

During the final battle in The Precursor Legacy, light eco was created when four colored eco beams were emitted from towers surrounding the dark eco silo, combining above its center. Jak harnessed a cloud of the light eco, giving him the ability to destroy Gol and Maia's Precursor robot with a single light eco projectile. This is the only known instance where light eco was used offensively, in contrast to its defensive capabilities displayed in Jak 3.

During Jak 3, Jak and Daxter found a massive Precursor oracle while exploring the Monk Temple. Jak was granted the "gift of pure light," as the Precursors depended on him to save the planet from the Dark Makers when the "past and future collide as fate hangs in the balance."[1] After visiting the oracle three times and being met by a projection, Jak had obtained four separate light powers to balance his dark powers, providing him with tactical and defensive advantages rather than sheer offensive force. Among these included the ability to heal himself, slow down time, glide, and generate an orbital shield.

While channeling Light Jak, Jak has an erect and composed posture, with a glowing blue complexion consuming his skin, clothing, armor, and hair.[note 1] He attains a blue aura around him, and his eyes glow completely white. This is a stark contrast to Dark Jak's aggressive and feral form. 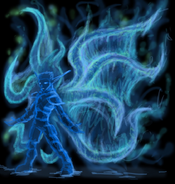