Main Town is a district in Haven City in Jak II and Jak 3, referred to as palace ruins following the fall of the Palace at the beginning of the War for Haven City. It was the highest district in class during Jak II, though was surpassed when the Water Slums and northern Slums were renovated into New Haven, especially following its destruction and subsequent abandonment.

Jak had to traverse Main Town primarily to reach the Mar Memorial Stadium, Tomb of Mar, and the Palace. Additionally, the missions "Rescue lurkers for Brutter" took place partly in Main Town, as well as "Beat Erol in race challenge". This sector was identified with a green barrier.

The opening cinematic of Jak 3 saw the fall of the Palace, which destroyed Main Town (among many other sectors) and rendered it the "palace ruins" and "Main Town ruins," along with the ruined stadium. Veger bombarded the Palace after correctly assuming the entrance to the Precursor core catacombs lied underneath it. Afterwards, during the War for Haven City, stinger metal heads occupied most of the downtown Main Town area, with spyder gunners and mantises occupying the ruined stadium section and beyond.

The area was visited after Jak's initial re-entrance to Haven City after traversing the eco mine, and was revisited in order to reach the ruined stadium and the palace ruins in the missions "Reach catacombs via palace ruins" and "Break through ruins", respectively.

Main Town was described by Baron Praxis to be where "the other [upper-] half live."[1] It had visually pleasing architecture compared to the other sectors, with tall buildings mostly made of stone and concrete. The area was complemented with river bays, fountains, and statues somewhat resembling the statues of Mar. Its most notable buildings were the Palace, Tomb of Mar, and the Stadium, but also included a large, roofed building acting somewhat as a pavilion. However, when the Palace fell on Main Town, most of this was rendered inaccessible and completely ruined. The only areas accessed were downtown Main Town (where the old entrance to the Slums used to be), and the stadium area. The stadium area could only be accessed by traversing a ruined corridor from the Palace's old roof.

The "palace ruins" encompassed the majority of the area between the ruined stadium and Metal Head city, being entirely ruined, losing its aesthetically upper-class attributes. It even broke to breach the concrete barrier which once cut this area off. 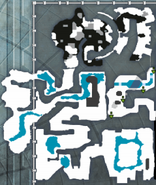