Jak and Daxter Wiki
Register
Don't have an account?
Sign In
Advertisement
in: Locations in Jak 3, Metal Heads

Metal Head city is the epithet of an area of Haven City overrun with metal heads during the war in Jak 3. It is comprised of the former southern Garden and part of the western Bazaar, terraformed into an environment common to the metal head species, ending with the Metal Head tower.

When the Metal Heads resurged after the death of Metal Kor, they captured the westside of Haven City and began making advancements towards the former site of the Palace. They eventually got a sufficient enough foothold in the southern Garden and western Bazaar that they were able to terraform the entire area and build a massive tower. The whole sector became a river, filled with acidic, toxic sludge, with solid ground walkways on either side of the river that contained metal head eggs and other structures.

The metal heads eventually barricaded themselves from the Freedom League forces by building a large wall, barring that area from the Port. They did this in order to build new weapons, which Jak was eventually sent to sabotage in the mission "Destroy dark eco tanks". Jak also revisited this area to reach South Haven Forest and in the missions "Blow open tower door" and "Destroy Metal Head tower". 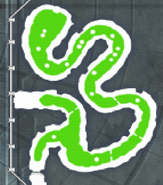