The Morph Gun is a playable weapon in Jak II and Jak 3. It is the base device to which several different weapons, known as mods, may be attached. Each mod is based on either red eco, yellow eco, blue eco, or dark eco.[1] In Jak II, the four mods Jak could acquire were the red Scatter Gun, yellow Blaster, blue Vulcan Fury, and dark Peace Maker. These weapons returned in Jak 3, with an additional two mods per eco type (making twelve total), including the red Wave Concussor and Plasmite RPG, the yellow Beam Reflexor and Gyro Burster, the blue Arc Wielder and Needle Lazer, and the dark Mass Inverter and Super Nova.

Jak gradually unlocked Morph Gun mods, along with various upgrades, over the course of both games, each varying in function and origin. It is unclear where the Morph Gun itself originated; Jak originally received it from Krew, although Damas would later give him an identical one. Morph Guns were mass produced in Haven City and could be seen at the gun course and Naughty Ottsel, though only Jak was ever seen using one.

Jak first received the Morph Gun in Jak II after the mission "Make delivery to Hip Hog Saloon": After successfully delivering payment to Krew on behalf of the Underground, Jak received the weapon as a "bonus", starting with only the Scatter Gun. Krew assigned Jak the mission "Beat Scatter Gun course", telling him he would hire him for wastelander work upon satisfactory completion of the gun course challenge.

Soon afterwards, Krew tasked Jak with "Destroy turrets in sewers", promising him another upgrade if he succeeded. Jak did so, and Krew rewarded him with the Blaster, which he told him he could find in the gun course, along with another challenge.

After the mission "Collect money for Krew", Krew gave Jak his first gun upgrade, which improved the rate of fire of the Scatter Gun.

Some time later, Torn tasked Jak with "Protect site in Dead Town", giving him the Vulcan Barrel mod for "that pea shooter of yours", despite thinking he was probably wasting it.[2] After the mission "Rescue 3 lurkers for Brutter", Krew gave Jak a second upgrade, which doubled the ammo capacity on all three gun mods.

Krew gave Jak the Peace Maker upgrade after Jak completed "Escort men through sewers". The upgrade was similar to Krew's henchman Sig's Peace Maker, though it charged faster and was weaker. Lastly, just prior to "Beat Krew in weapons lab", Krew gave Jak a third gun upgrade, which doubled the damage dealt by all four gun mods.

Jak did not have any of his weapons at the start of Jak 3; his Morph Gun was presumably confiscated by Veger upon arrest and banishment from the city. However, Damas eventually gave Jak an identical Morph Gun, again starting with the Scatter Gun, for the mission "Earn 1st war amulet". After completing that mission, Damas rewarded Jak with his next upgrade, the Blaster.

After returning to Haven City, Jak and Daxter met up with Tess in the gun course, who had since been developing weapons for the war effort. One such weapon was the Gyro Burster, a third yellow weapon, which she would give to Jak if he could prove he could protect Daxter,[3] by completing "Beat gun course 1". Similarly, Jak gained from Tess the third and final red weapon, the Plasmite RPG, after completing "Beat gun course 2".

Each Morph Gun mod shares the same base design and mechanics, with certain parts of the gun contracting, expanding, or changing positions when a mod is activated (as well as a different ammo clip showing). They also each have the same controls:

for the red mod,

for dark. Subsequent mods in Jak 3 can be accessed by pressing the button again, while holding the button will cause Jak to put the weapon on his back.

The Morph Gun is essentially based around a cube-shaped magazine port,[4] which has three high-pressure exhaust vents at the top,[5] out of which the ammo clips for each weapon expand when activated (the red and blue clips expanding out of the top vent, and the yellow and dark clips expanding out of the right vent). This leaves two vents open at all times for gas release.[6]

Between the bottom of the magazine port and the shoulder stock is the Morph Gun's handle, except when the blue mod is activated, in which event it moves to the left side of the port. Additionally, the shoulder stock flips upside down when the blue mod is activated, allowing for it to be carried (presumably due to its heavier weight), rather than held traditionally.

In front of the magazine port is the gun's manual reload pump, or cycler, attached to a reload-dampening shaft[6] (also known as the recoil buffer),[7] used only for the red, yellow, and dark mods. The blue mod instead uses high-cycle rotary barrels,[6] from which the Vulcan Barrel presumably gets its name, bound together by two gyro stabilizers[5] on either end that double as fan-like cooling shunts,[6] rotating faster than the barrels themselves.

Lastly, each mod uses the same double-barrel housing at the very front, with the gun barrel itself on the top, and a ruby laser sight on the bottom that comes with aim assist[6] and homing guidance;[7] however, the laser beam itself is deactivated for the Scatter Gun, due to it not requiring precise or long-distance aiming. Furthermore, the Scatter Gun's top barrel is fully choked,[7] presumably giving the blast its cone shape. For the yellow mod, both the housing and the barrels extend considerably.

The red mod focuses on power and area of effect, but at the sacrifice of distance and speed. The red weapons are best for crowd control and short-ranged attacks, and are fairly economic in ammo consumption. This makes the red mod a decent default and fallback, though it is outclassed by other mods in more challenging situations.

The first red weapon, the Scatter Gun, is a shotgun with a very short range and low rate of fire, but has appreciable power and ammo efficiency. The second weapon, the Wave Concussor, requires a charge before releasing a shockwave of red eco energy along the ground, making it best suited for large groups of ground-level enemies. The third weapon, the Plasmite RPG, launches a powerful bomb with a large radius of effect that detonates on contact.

The yellow mod focuses on power and range, but at the expense of ammo efficiency and demanding more precise aiming. The yellow weapons are well suited for most combat situations, but its high ammo consumption means other weapons should be used for more specialized tasks.

The first yellow weapon, the Blaster, is a basic long-range rifle with a medium rate of fire. It fires a single blast at a time with decent aiming assistance, making it a dependable choice for most straightforward situations.

The second weapon, the Beam Reflexor, is an extension of the Blaster in that its shots deflect off of enemies and walls, quickly forming a chaotic field of cross-fire and making it best suited for clearing rooms of enemies, especially aerial ones. The third weapon, the Gyro Burster, deploys a floating drone that shoots rapid-fire blasts in all directions. This weapon is well suited for taking out groups of enemies from far away, particularly when they are air-bound.

The blue mod focuses on rate of fire and range, but sacrifices power and ammo efficiency. Although its aiming mechanics are similar to that of the Blaster, its constant flurry of bullets make it more forgiving in accuracy demands. Instead, skill with accuracy helps more with ammo preservation.

The blue mod is well suited for crowd control and particularly strong enemies, as it can deliver more blasts before the enemy has a chance to recover. It also performs in chaotic situations thanks to its bullet spray.

The first blue weapon, the Vulcan Fury (also known as the Vulcan Barrel), is a minigun delivering single bullets in rapid succession. The second weapon, the Arc Wielder, releases a large stream of blue eco at an appreciable distance, electrocuting enemies in its arc. The third weapon, the Needle Lazer, releases a trio at a time of small, blue, enemy-seeking laser beams, spiraling out in the distance if they fail to hit a target. 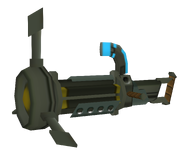 The dark mod focuses on power and destruction, at the considerable expense of ammo. With a decent rate of fire and range, these weapons are best reserved for highly chaotic situations and particularly tough enemies.

The first dark weapon, the Peace Maker, requires a charge before releasing a powerful spherical blast of electricity towards its target, whence it then releases an arc that deals additional damage to targets nearby. This weapon is best suited for large, faraway groups of enemies, or for enemies with considerable strength and distance (such as bosses).

The second dark weapon, the Mass Inverter, is an outlier to the dark mod's usual specialties. Rather than being purely offensive, or very high-powered at all, it releases an anti-gravity field that paralyzes individuals inside of it (even non-enemies and vehicles) and sends them floating into the air. When the effect wears off, the victims fall back to the ground, taking some damage. This weapon is best at making the enemies defenseless and vulnerable to attack, while a different weapon, such as the Beam Reflexor, actually damages them.

The third weapon, the Super Nova, is a mini-nuke that fires a rocket which embeds itself into any nearby surface, causing a blinding white light upon detonating, destroying everything in the general vicinity, and leaving only a mushroom cloud behind. Due to this weapon's high ammo consumption, it is best used as a last resort for clearing rooms or taking care of tough enemies. Furthermore, its effect is less impressive in areas with a high enemy spawn rate.