Jak and Daxter Wiki
Register
Don't have an account?
Sign In
Advertisement
in: Locations in Jak II

Mountain Temple, also known as the Precursor Mountain Temple, is a location featured in Jak II and appeared but is inaccessible in Jak 3. It is a vast network of Precursor structures built among a mountainous forest region north west of Haven City. It is located to the north of the neighboring location Haven Forest. Most of its architecture is constructed of Precursor metal, but is encrusted within a foundation of forestry and other flora, accented with a natural spring and stonework. No Man's Canyon is located here, to the north east regions of the temple. Jak and Daxter were first sent here on the missions "Find lens in Mountain Temple", "Find gear in Mountain Temple", and "Find shard in Mountain Temple", during which they had to recover the lens, gear, and shard artifacts to activate the machinery in No Man's Canyon and find the Tomb of Mar. After completing a Seal of Mar artifact, they returned to the area to access Mar's gate and enter the canyon (mission "Use items in No Man's Canyon").

Mountain Temple is accessed via a warp gate following the air lock along the western wall in the Northern Garden. It is divided into four separate areas, each with varying platforming challenges, Precursor structures, and other unique features. The area appears to be the natural environment of the hopper, ram head, and manic head metal heads.[a 1][a 2][a 3] No Man's Canyon may be located via a Precursor door almost immediately after riding an elevator down, though the other three locations may be accessed after walking past the door. To the left, the southern temple may be accessed, though after proceeding further forward, a large pavilion-like hub has two access points to both the northern and eastern temples. Two floating platforms are used in the northern and eastern temple exit points to transport back to the hub.

The southern temple is accessed by turning almost immediately to the left once leaving the elevator platform. This area is home to the only spring, fed through unknown means, and is home to the sanctuary which holds the lens artifact. This area has various floating platforms and the most centurion metal heads, numbering three in total. The springs are home to the amphibious hopper metal heads, of which appear in large quantities. This area also contains a ram head, which busts through a stone barracade preceding the final centurion.

The northern temple is accessed after proceeding to the central hub and turning right. It is the most Precursor orb-rich area of Mountain Temple, and also has the most hopper metal heads. This species of metal head appear in immeasurable amounts in an ambush near a large incline. Following this area are a small network of corridors which eventually lead to a massive dark eco lake, with Precursor metal-made boxes presenting a maze-like challenge. After solving the procedural puzzle, a ram head may be located occupying a large platform similar in appearance to a dark eco silo. A Precursor oracle-like statue is placed in front of here, which holds the shard artifact.

The eastern temple is located after proceeding immediately forward once at the central hub. The first thing that is noticed is a ram head which again busts through a stone barricade. After this, four manic heads are encountered in a canyon which precedes a vast, steep incline which serves as a tumbling ramp for an infinite amount of large boulders. After passing this, a narrow canyon is accessed which leads to the gear artifact.

Entrance to the northern temple 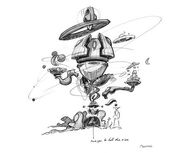 Concept art of the gear machine