An oracle is a Precursor statue featured in The Precursor Legacy, Jak II, and Jak 3. Oracles are large, heavy-built Precursor statues made of either Precursor metal or stone. They have the typical head of a Precursor statue: an insectoid face, two large bug-eyes, a hollow nose, and a large proboscis extending past their face, often used to either present power cells, or shoot a bolt of dark eco. The hollow nose is noticeably shaped like a Precursor orb, and may act as a means of receiving them. The common oracles have a feline-like body, somewhat resembling a large lion at rest.

Three oracles can be found in The Precursor Legacy. One in Sandover Village on a cliff ahead of the Farmer's house, one in Rock Village on a pathway, and one in Volcanic Crater perched in a crater beneath the ground level. All of them contain one power cell in each of their two eyes, which they will give Jak in exchange for 120 precursor orbs. When first approached, an oracle will make cryptic pronouncements or prophetic statements of which often hint towards the plot of the rest of the series.

Only one oracle is found during Jak II, and that is in a hut in the Water Slums. This time, it no longer asks for Precursor orbs, nor does it contain power cells for eyes. This time, it requests that Jak return to it skull gems, the trophies of fallen Metal Heads. In return, they allow Jak control of his new Dark Jak alter ego, and also give him dark powers via more dark eco injections.

Though there was only one common oracle seen, there was a large oracle in Mar's tomb, though it did not share any of the same characteristics other than the celestial, god-like voice.

During Jak 3, a massive trinity oracle can be found in the center of the Monk Temple. This oracle more closely resembles the oracle found in Mar's tomb during Jak II than the one in the Water Slums and in The Precursor Legacy (although it has the typical Precursor statue head). This is a huge construct with three incredibly large oracles resembling human bodies with insectoid faces in a pose. Each of them has some distinguishing feature that is different from the last, though they all have a fanned hat, large glowing eyes, and a platform in front of them that they can use to beam light eco into their subjects.

Smaller versions of oracles, called oracle totems, can be found throughout Spargus, the Wasteland, and the Slums sector of Haven City. When Jak gives these statues a specific (but varying) number of skull gems, the totem will give Jak a specific challenge. When Jak is able to complete these challenges, he is rewarded with Precursor orbs. 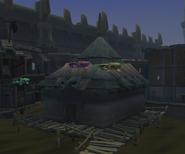 The Oracle's hut in Jak II. 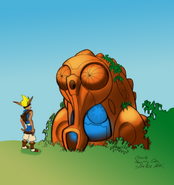