Osmo is a character in Daxter. He is the owner of Haven City's Kridder Ridder extermination company, a company that has been in his family for generations, founded by his grandfather, Ozmar Itchy Drawers III. He is the father of Ximon.

Osmo employed Daxter as an exterminator for some time before Daxter was able to save Jak from prison. He owns a primitive zoomer that he calls "Betsy", which still uses propellers similar to the A-Grav Zoomer. It is unknown what happened to him after the events of Daxter, though he did pay a visit to the Naughty Ottsel after Jak and Daxter defeated Kor.[2] He is 87 years old in Jak X: Combat Racing, making him about 85 in Daxter.

Osmo comes across as somewhat proud and old-fashioned, but also kind-hearted yet guileless. He first protected Daxter as he was running away from guards by pretending he did not see him at the beginning of the game. He then indulged Daxter and his grandiose stories at the bar, after which he hired him. Osmo persistently gives Daxter odd jobs and requires his dedication to the job, and was very protective and proud of the company that his family worked hard to build. He required that Daxter be very careful with the Betsy and took pride in the electric bug swatter, which he called a "more elegant weapon".

Osmo showed a great deal of attachment to his company, an heirloom for which he felt a great pride and responsibility to keep in-tact. He expressed worry when Kaeden threatened to shut the shop down for not completing enough jobs, and was visibly distraught when Kaeden blew up the shop.

Osmo is a very stout man, short in stature and old in age. He has a bald head and a long white beard, with long white hair on the back of his head as well. He wears a button-down short-sleeved green shirt, thick green utility pants, and blue boots. He also wears brown wrist cuffs, brown suspenders, and a Kridder Ridder name tag.

Osmo is the father of Ximon. Although the two are rarely seen together, Osmo seems to be disappointed in Ximon, referring to him as his "fool son of mine". His grandfather's last name was "Drawers", therefore his surname may be assumed to be the same. 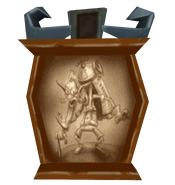 Retrieved from "https://jakanddaxter.fandom.com/wiki/Osmo?oldid=135966"
Community content is available under CC-BY-SA unless otherwise noted.