Rapid-fire turrets, lob turret, missiles
The Phantom Blade, commonly referred to as the galleon, is an airship in The Lost Frontier. She served as the flagship and mobile base of the Sky Pirates, commanded and piloted by Captain Phoenix. The Captain's first mate Klout, as well as several deckhands and soldiers constituted the ship's crew.

After Jak aligned himself with Phoenix, he was able to lay the ship acourse for a desired hub location from the console in the ship's wheelhouse. He was also able to make use of the ship's hangar, where he could park and modify the planes collected over the course of the game. As an honorary pirate, Jak eventually became the ship's official helmsman as well.[1]

The Phantom Blade met her fate when Phoenix used her to intercept the massive dark eco stream drawn upon from the eco core by the Aeropans, preventing catastrophic effects. The sacrificial act saved the planet, but ultimately saw the end of the Blade and her captain.

The Phantom Blade's early history remains unknown, but at some point she either came into the possession of or was built by Captain Phoenix, who utilized her as a mobile base for his band of pirates. The galleon made her debut in the opening sequence of The Lost Frontier, when the pirates attempted to rob Jak, Daxter, and Keira of their eco. The ship grappled onto their plane, the Hellcat, with tether cables, allowing Phoenix and Klout to slide down and engage the trio. After a brief fight, the pirates retreated back to the galleon, unsuccessful in their attempt.

Later, after Pheonix had stolen the trio's newly acquired eco seeker and taken Keira with him, Jak again took to the skies to stop the Phantom Blade from leaving Brink Island so that he could board the ship. He destroyed the galleon's main propellers, followed by her rear thrusters, and ended the battle by taking out its primary defenses, which came in the form of eight rapid-fire turrets. Defenseless and unable to flee, Phoenix was forced to let Jak board the galleon.

During this time, Keira appeared to have gained some form of insight into Phoenix's battle against the Aeropans, but for unknown reasons withheld this information from Jak. As a result, Keira acted as a mediator between Jak and Phoenix, forcing a truce between the two during the time Keira had possession of the seeker (for one week, courtesy of the Aeropans). Additionally, Phoenix took a liking to Jak for his determination, and so Jak became a reluctant ally for the time being. Furthermore, Keira was given her own workshop near the back of the Blade.

Jak's first mission assigned to him by Phoenix was to retrieve supplies from the hidden pirate town of Far Drop. Pheonix stated that he would have gone himself, but that "someone" shot his engines full of holes, and he had to stay aboard to fix them. Jak accomplished his task, allowing the galleon to load up and head out. As a result, Phoenix made Jak the official helmsman of the Phantom Blade, as well as an honorary pirate. Jak could now steer the ship as he saw fit, with his first course set to the Aeropan research rig where he would search for light eco to power the eco seeker.

Shortly after, the Captain and helmsman had a dispute as to where to set sail, as both Far Drop and the Aeropan barracks picked up signals for coordinate spheres required for the seeker to operate. Phoenix deferred to Keira, who in turn deferred to Jak, angering Phoenix. Shortly after finding the sphere at the latter location, the Phantom Blade was ambushed by the barrack's automatic defense system. Jak destroyed the defenses and managed to defend the Blade, which took heavy damage.

After retrieving a third and final sphere at an area beyond the Brink called Sector Zero, Jak found the Blade being ambushed by the Aeropan flagship, the ACS Behemoth. Jak successfully took out the initial weapons barrage and returned to the Blade, only to find out the Behemoth had grappled onto the Blade for an up-close assault. He thus had to go to the upper deck to repel the Aeropan boarders and defend the galleon from the battleship's turrets and gunships, doing so by utilizing the galleon's on-deck rapid fire turrets (of the same kind that he destroyed in the beginning of the game), as well as its lob turrets.

Now in possession of all three coordinate spheres, the pirates were able to locate the eco core beneath the previously visited research rig. Attempting to avoid detection by the Aeropans, they left the Phantom Blade behind. Klout opted to stay aboard, promising that the rest of the crew would follow them in once they reached the core. However, Klout betrayed the group, revealing their whereabouts to Skyheed, the duke of Aeropa, and informed the Aeropans about the eco core, Far Drop, and the Phantom Blade herself. Shortly after, an anonymous individual transmitted a message to the galleon that the Aeropans had laid siege to Far Drop, and so the crew went to defend the town, once again facing off against the Behemoth in the process. Receiving yet another message instructing them to use the barracks warp gate to infiltrate Aeropa, the pirates prepared a retaliatory siege. Once there, Keira knocked out Aeropa's long-range sensor array, allowing the Phantom Blade and her crew to get to the city.

After discovering that Ruskin, the chancellor of the city, was the one sending the messages, Jak bested Skyheed, causing the Duke to flee in his personal heavy fighter. Phoenix promised to keep up with Jak with the Phantom Blade while Jak pursued Skyheed, using whatever flier he wished to pick from the galleon's hangar, courtesy of the Captain.

Now... Skyheed, or whatever you've become, see if you can take a "Blade" to the heart! Hah hahah!

The Phantom Blade has a narrow profile for emulating a sailing ship. Starting at the front of the ship, she possesses a beakhead capped with a skull figurehead, with one lob turret mounted on the back of the beakhead, a mast with a smaller sail mounted on top, and a large rudder mounted to the bottom.

On either side of the beakhead are two narrow decks, each with a wing protruding from the side, each wing with two rapid-fire turrets (one mounted on both the top and bottom). Said decks eventually lead to the lateral center of the ship. Here lies the wheelhouse, identifiable by its large window. On either side of the wheelhouse is a rapid-fire turret and two-tier decks. A lob turret is mounted on the top, as well as a mast with a larger sail.

Behind the wheelhouse is the poop deck, with a dome that would be Keira's workshop (see below) situated in the back. On either side of this area is a wing with a very small flag-like sail. The stern of the ship consists of two beakhead-like decks capped with a rapid-fire turret each, and mounted with a lob turret each on top; these mounted on top of the dual main thrusters, below which are four smaller thrusters. At the hull of the ship is a main propellor engine on either side of the hangar entrance and runway. Both propellors have a wing protruding from the side with a similar flag-like sail.

After docking with the Phantom Blade an elevator will lead up to the hangar. There are five platforms in this hangar, each indeed being its own elevator and having the capacity to keep one plane (planes will appear as they are unlocked). Toward the back of the hangar is a computer console, which can be used to adjust plane mods and plane weapons. Beyond the computer are small stairways on either side of the room leading to the main deck, guarded by a pirate (said pirate will at some point in the game offer the Gunship).

The main deck serves as a hub to other parts of the galleon. Straight ahead on either side are large stairways which lead to the wheelhouse.

This room is where Phoenix can be found, as well as the helm. To the right of the wheelhouse's staircase is an elevator that will take you up to the upper deck (see above).

To the back of the main deck are two large staircases on either side of the room that leads to Keira's workshop, which is essentially a small research lab, with eco crystal machines to the left, bookcases to the right, and a workbench in the back. 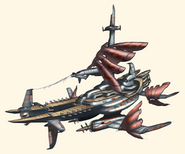 Concept art of the Phantom Blade. 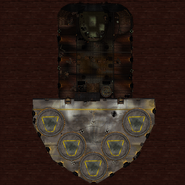 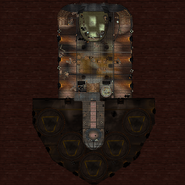 Lower deck map.
Add a photo to this gallery

Retrieved from "https://jakanddaxter.fandom.com/wiki/Phantom_Blade?oldid=136387"
Community content is available under CC-BY-SA unless otherwise noted.