I have spent my life searching for the answers that my father, and my father's fathers, failed to find.

Samos Hagai[1][2][3] is a prominent supporting character in the Jak and Daxter series. He first appeared in The Precursor Legacy as the mentor and watch over of Jak and Daxter, and the sage of green eco.[4] He was the founder of the Underground while going under the alias the "Shadow",[5] before taking young Jak to Sandover Village to raise him and his daughter, Keira, and become a full-fledged sage.[4]

He was voiced by Warren Burton.[6]

Samos Hagai was a citizen of Haven City before and during Baron Praxis' rise to power. When the Metal Heads attacked a Haven City district surrounding the sacred site, the Baron relinquished the sector and pulled his forces back, leaving the district and the citizens there to die at the hands of the Metal Heads, who were attracted to the sacred site. Samos stayed behind to defend the Site, effectually doing so, though the district itself eventually became the ruins of Dead Town. The sacred site was said to draw some ancient power, inside of it lying the Life Seed, which Samos would eventually use to gain sage powers.

At some point near these events, Samos, who went by the alias "The Shadow", started a rebel movement known as the Underground, waging war against Baron Praxis with the intent of re-establishing the House of Mar as the ruling dynasty of Haven City. The Shadow was known as an elusive figure, who was met as the "spiritual leader" of the Underground.

Before The Precursor LegacyEdit

While leading the fight against Baron Praxis, the Shadow found a child wandering the streets, wearing a Seal of Mar amulet around his neck, denoting he was royalty and an heir to the throne. He assigned the kid to Kor, an Underground member (though would eventually turn out to be a spy, and disguised as a human who was really the Metal Head leader). Some point after this, the Shadow met two of his newest Underground inductees, who quickly gained popularity for their vengeful and reckless nature. The two were Jak and Daxter, who, upon seeing the young Samos Hagai, recognized him without receiving the inverse. It is eventually learned that Jak grew up in the past, and that the Shadow must take young Jak (the kid wearing the Seal of Mar) into the past in Sandover Village to raise him into his adolescence in order to complete the time loop so he can gain the powers to face the Metal Head leader in the future.[5]

During the early years in Sandover Village, Samos raised Jak alongside the Explorer who was implied to be his adoptive uncle, while completing and furthering his research of green eco, and also at some point had a daughter named Keira with a mentioned-only but unnamed mother. The events of The Precursor Legacy took place around ten years after their arrival to the village.

At some point before the beginning of The Precursor Legacy, Samos prohibited Jak and Daxter from exploring outside of the village, and particularly Misty Island. Instead of heeding Samos' wisdom, the two steal the Fisherman's speedboat and sneak off to Misty Island, during which Daxter falls into a dark eco silo and gets transformed into an ottsel. When Jak and Daxter return to Samos for help, he, disgruntled, stated that they must consult Gol Acheron, the sage of dark eco. He said that he would teleport them to Gol's citadel, but none of the other three sages had activated their teleport gates for some amount of time, meaning that Jak and Daxter would have to travel by foot, earning power cells during their venture to power certain inventions necessary to continue north. During their journey, Samos begins to suspect something is wrong, as for every sage's hut they visit, they find the sage gone, the hut a wreck, and in the case of Rock Village, heavily under siege by lurkers. While at the Red Sage's hut in Volcanic Crater, Gol and Maia confront Samos and the group, revealing to them that they had kidnapped the sages in order to power their Precursor robot, which they would use to open ancient Precursor silos to flood the world with dark eco and reshape it to their liking.

After collecting enough power cells, Samos sends Jak and Daxter ahead to Gol and Maia's citadel in an attempt to free the sages, where Jak and Daxter would then activate the teleport gate there to transport Samos and Keira. However, while they were tending to this, Samos was kidnapped by the dark sages. When Keira arrived at the citadel, she explained this to the duo, where they then entered the citadel, freed the sages, and destroyed Gol and Maia and their Precursor robot. They then opened a large Precursor door using one hundred power cells which revealed the rift gate and rift rider which they would use in the opening cutscene of the next game.

Between the events of The Precursor Legacy and the opening cutscene of Jak II, Samos deposited the Life Seed for his younger self (the Shadow) to use.

Jak, Daxter, Samos, and Keira then ride the rift rider through the rift gate into the future in Haven City. Jak is imprisoned upon landing in Haven City, Daxter becomes an exterminator, and Keira becomes a race mechanic in the city. Samos is arrested and imprisoned (possibly being mistaken for his younger self, the Underground leader) and remains there up until Jak and Daxter rescue him roughly two thirds of the way into the game. After being freed, Samos resumes his role as Underground leader alongside his younger self, which he eventually sends back into the past to raise young Jak in Sandover Village to repeat the time loop.

Samos was an important member of the revised Krimzon Guard known as the Freedom League. He had input on many of the missions the Freedom League sent Jak on. Other than this, Samos nor his daughter Keira were much present during Jak 3. It was Samos who greeted Jak back into Haven City at the barrier separating New Haven and the Main Town ruins, expressing his regret for not stopping Veger in banishing Jak to the Wasteland. When the Precursors were revealed to be ottsels, Samos disappointingly remarks that he spent his life "searching for a bunch of furballs."[7]

Samos was a supporting character, and one of the few who did not race. He was very protective of Keira here, and did not allow her to join the others on the track, due to the intense danger of combat racing. Keira later disobeyed her father's orders and took part in the final. Samos obviously objected, but later congratulated his daughter on her racing.

Samos is a stout human with a stubby body, gaunt limbs, large feet and hands, a large round head topped with a large log, and slightly green-tinted skin complexion. During his years in Haven City before going into the past, Samos had a large, dark green afro-like hairstyle with an egg embedded on the top. Around ten years after this, while in Sandover Village, his hair grew out long and white, and the egg appeared to have hatched as a bluebird can be seen flying around him. His facial hair also went from a minimalist mustache and goatee to a full-blown beard and a mustache which trailed alongside the beard down to his waist. His clothing also went from a formal waistcoat and button-up shirt to a plain green tunic and waist cloth typical to olden-world villagers when he moved to Sandover Village. Samos also carries a staff which is primarily only seen as a walking stick, and two thick stumps used as stilts. His eyes are very small, as they can be seen behind his glasses in the second cutscene of the Precursor Legacy, and he wears glasses with his left eye lens being larger than his right for some unspecified reason.

Samos, being an elderly sage, is short-tempered and taut, while often delivering wise remarks and advice. In the beginning of The Precursor Legacy, he is portrayed as very strict and protective of especially Jak, but also watching over Daxter as well. He was hardly able to be charmed or impressed, and held a high standard over the two boys who claimed to be "heroes" but who he saw as village scamps. Over the course of the game Samos gradually makes remarks of impression, and towards the end he admits his pride in them and that he believed they had what it took to become heroes.

When his younger self was met in Jak II (the Shadow) he appeared to be more concerned with justice, especially pertaining to Baron Praxis' unjust rule in Haven City, and carried himself as a spirit leader and rebel. This changed after the course of almost two decades after his wide range of experience with green eco, the secrets of the Precursors, and aiding Jak and Daxter's adventures. He gradually became wiser and more laid back, especially when seen in Jak 3 as one of the leaders of the Freedom League (though he did not recede his protective nature over Keira as seen in Jak X: Combat Racing). Both his younger and older self share a dislike of teleport travel, but will use such technology when they have to.

Samos, as the sage of green eco, possesses many capabilities such as levitation, communication with the earth, and abstract (but sometimes affected) wisdom. He is also implied to have other green eco capabilities such as power, healing, and at one point threatened to turn Jak and Daxter into ferns.[4] He is also able to shoot green eco beams from his hands, as well as provide a protective shield around an object as seen with the rift rider towards the end of Jak II.

Samos uses a staff as a walking stick and direction device. Other than this Samos does not rely on any devices or equipment except for a pair of glasses, the left side of which is a large spectacle with microscopy devices, with the right side being a seemingly small glass. He also wears many different rings, though it is unknown what these are used for other than aesthetic. 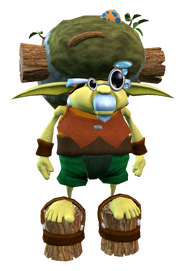 Young Samos, a.k.a. the "Shadow".
Add a photo to this gallery

Retrieved from "https://jakanddaxter.fandom.com/wiki/Samos_Hagai?oldid=132343"
Community content is available under CC-BY-SA unless otherwise noted.