Far Drop
This page is about the silverback, a mutant ape. For other mutant apes, see Mutant ape.

The silverback, also known as the dark mutant, is an enemy in The Lost Frontier. Formerly a common creature among Far Drop residents, they eventually turned hostile due to dark eco mutations at the hands of the Aeropans. Silverbacks would eventually be re-captured and further experimented on, turning into franken apes.

Mutant apes are first encountered by Jak in Far Drop. Barter referred to them as "dark mutants" and claimed that they had shown up a few months prior. He stated that he needed "strong fists" to protect his goods, and hired Jak to defeat them in exchange for supplies. Jak first took care of the silverbacks vandalizing Barter's tavern, then the ones breaking his generator at the power station, then those vandalizing the orphanage, and lastly the others breaking his loading crane (all the while indirectly chasing the alpha mutant around town).

The silverbacks are only in the first stage of their infection, while the franken apes are in their second stage. Thus, they both have slightly different appearances. While they both have an appearance similar to a gorilla (and in fact appear to be the same exact species), the silverbacks have a purple-white fur with green swirls on their arms, and the franken apes contains a more purple appearance with patches of red fur and clear signs of experimentation.

Both the silverbacks and franken apes are fairly capable alone, though their formidability increases exponentially as they attack in larger groups. They will attack straight on, but will also flank you after circling around. They are quite powerful in their own right, but suffer from their susceptibility to being stunlocked, as each individual hit from a gunstaff mod will stop them in their tracks for a split second. They also each have a unique sort of rage mode, similar to the alpha and hyper mutants.

Silverbacks possess only two melee attacks, one of which is a swing with each of their arms in rapid succession, while the other is a lunging jump attack during which they reach out with one arm to smash it down in front of them. The lunging strike deals more damage than the standard one-two punch attack, but it is rarely used.

Upon sustaining about two-thirds of damage, they will activate a rage mode, wherein they will take on a purple hue with dark eco bolts emitting from their bodies. This mode does not appear to impart any special abilities, but is a good indicator for how much longer you will have to work on them before they go down. Conversely, when facing multiple groups, knocking them back repeatedly with the Scatter Gun is the best course of action, in combination with repeated spin kicks if necessary. However, this may not work when flanked, and there is a delay between the end of Jak's kick and his ability to shoot the Scatter Gun. 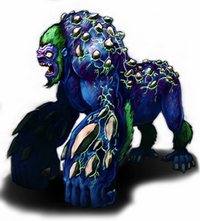 Early concepts (pictured right top) of the mutant ape featured purple and green fur, glowing green veins, and keratin spikes protruding from its arms and shoulders. This concept made it to beta (pictured right bottom), but was later changed in favor of the current appearance.

Retrieved from "https://jakanddaxter.fandom.com/wiki/Silverback?oldid=133749"
Community content is available under CC-BY-SA unless otherwise noted.