The Slums is a district in Haven City seen in Jak II and Jak 3. It is the least developed part of the city, consisting of derelict apartments, ditches, damaged and unfinished dirt roads, with a seeming lack of plumbing and electrical upkeep. Guards commonly complain about the smell. It is the home to the Underground movement's hideout (in Jak II) as well as the fortress prison. In Jak II, it serves to connect the Industrial Section to the Water Slums and Stadium district, while in Jak 3 it connects the Industrial Section to New Haven.

The Slums district was the first Haven City area Jak accessed after his prison break in the beginning of Jak II. After his escape, he met Kor, and defended him and a royal child who was in his care from a squad of guards. After this, the elderly man directed Jak to the Underground movement, telling him to ask for Torn to see the Shadow.

Due to the Underground being located in the Slums, various attacks were carried out on the district. These included Baron Praxis shutting off all water to the Slums, which Jak reactivated in the mission "Find pumping station valve", as well as a deployment of HellCat cruisers ("Destroy five HellCat cruisers"), and a deployment bombots ("Protect hideout from bombots"). Baron Praxis also threatened to bulldoze condemned city sections which he saw as unfit,[1] presumably targeting the location of the Underground.

During Jak 3, the Slums district appeared to be uninhabited as the area was home to constant battle between the Metal Head, KG Death Bot, and Freedom League factions. The area where the Underground hideout used to be located was concealed by new apartments (as the Underground was dissolved after the death of its adversary Baron Praxis). The Slums was heavily damaged during the war. At some point before the events of Jak 3, the northern Slums and Water Slums were renovated into a shielded sector called New Haven.

Dead Town was no longer accessible in this game due to the northern Slums being renovated. Additional changes include Onin's tent being relocated to a corner of the Slums next to the fortress instead of the Eastern Bazaar. The fortress is also inaccessible due to the entrance being barred by rubble.

The Slums is presumably home to many of Haven's poorer population. It is a squalid district with unfinished construction and neglected architecture. The area reflects the strife and poverty in Haven City under Baron Praxis' rule. The entrance to the Slums from the Industrial Section consists of narrow airways, with the western area of the Slums is home to a small market with produce stands. After travelling through a narrow valley to get to the northern part of the Slums, or "downtown" Slums, a more open area can be accessed which has connections to the Water Slums and Stadium districts, as well as Dead Town (Jak II), or New Haven (Jak 3). 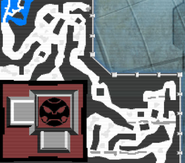 Map layout of the Slums during Jak II 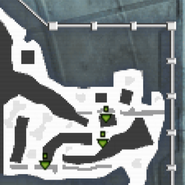 Map layout of the Slums during Jak 3

The Slums
Add a photo to this gallery

Retrieved from "https://jakanddaxter.fandom.com/wiki/Slums?oldid=131235"
Community content is available under CC-BY-SA unless otherwise noted.