Spargus (also known as Spargus City) is a location featured in Jak 3, also appearing as a separately-identified race track in Jak X: Combat Racing. It is a refuge village located along the northern coast of the desert Wasteland, the people of which were self-described as "Haven City's refuse"[1] up until the cessation of the Metal Head Wars and Sig's ascension to the throne. It is a monarchy, first ruled by King Damas until his death. As a place of refuge, those who were rescued were either proven of worth to Spargus or cast back into the Wasteland, as if they were "never found."[1]

Those who did prove their worth were donned official "Wastelanders" and were given a war amulet comprised of three parts; each part earned after completing three separate gladiatorial Arena of Death challenges. The role of a Wastelander was to show unwavering loyalty to the king, to protect Spargus, and to find artifacts out in the Wasteland. The primary adversaries of Spargus are the marauders, which inhabit the Wasteland and attack all who they encounter. However, there was also a skirmish against the Dark Makers towards the end of Jak 3.

According to Damas, Spargus is comprised of those who were cast out into the Wasteland by banishment from Haven City. As such, it is assumed that the village was founded by the mentioned outcasts, though it is unknown who founded it or at what point it came into being. When Damas was overthrown by Baron Praxis as ruler of Haven City, he became the ruler of Spargus, presumably in the village's early history. Damas valued "strength and survival above all," and ruled unilaterally. His people were armed, ready to defend themselves at all times.

Damas also implemented the Arena of Death, inside of which outcasts who were found would have to battle marauders to prove their worth. He strictly maintained the "purity" of the arena, ensuring that all rules and customs were followed at all times. The only known rule revealed in-game is that one must fight to the death or defeat all his enemies; deviation from this rule was considered blasphemy and punishable by death.[2] Although this was the most common initiation to Spargus, as it reflected the level of strength and survival, there were other forms of proving one's worth to Damas. For instance, Pecker was made an adviser to Damas for his wisdom.[1]

During the events leading up to the conclusion of Jak 3, Damas' primary interest was his new Wastelander named Jak. Because of his dark powers, vehicular aptitude, fearless attitude and proven efficacy, he eventually shaped up to become who Damas considered to be "one of [his] finest warriors."[3] Jak served useful in defending Spargus from marauders, recovering Wasteland artifacts, corralling wild leapers for use in the city, and rescuing stranded Wastelanders, most all in the midst of severe sandstorms.

Ultimately, however, and perhaps most importantly, Jak saved all of Spargus and its people from an invasion of dark makers toward the end of the game. Damas picked up strong and unusual movement off the coast of Spargus' beach, invoking that Jak was the city's best gunner and it was his chance to pay off his life debt.[4] As the Wastelanders battled troopers on the ground, Jak defeated all of the incoming walkers that were coming in from the sea, as well as those that had deployed in-town. For his success, Damas rewarded Jak with the third and final war amulet, as well as the chest armor for the Armor of Mar set, which he noted he was saving for his own son but that Jak should have it.

After Jak used his completed war amulet as a beacon, Damas traveled to Haven City in his Slam Dozer. The King helped Jak in battling through dark makers, but ultimately died after a bomb overturned his buggy. Just after he died, Jak realized (and Veger confirmed), that he was Damas' son. In the epilogue of Jak 3, Sig was seen sitting on Damas' throne in the arena, indicating he inherited rulership over Spargus.

Spargus is a parched, arenaceous burg situated along the northern coast of the island Wasteland. Most of its buildings are made of stone, with a few other smaller structures made of wood. Huts and other housing units are built into the sandstone walls of the area, with broken steps in a stone case leading up to the doors. A large sandstone tunnel effectively divides Spargus into eastern and western sectors. Atop this tunnel is where the Wasteland Palace lies, inside of which Damas and his throne preside. The eastern sector of Spargus is where the garage and Arena of Death may be located, and contains a few buildings as well as a water well and light eco vent. The Arena of Death is preceded by a large stairwell, and consists of a throne at the front of the room, bleachers on either side of the arena, and a relatively large volcanic expanse where the gladiatorial battles take place. The arena may be adjusted with matter-formers which allows for the creation of different platform layouts and challenges. The garage, located across the way on the southern side, consists of a walled parking lot for buggies, managed by gatekeeper Kleiver.

The eastern and western sides are connected via a narrow corridor which is placed beneath the palace. As such, this area is roofed with the flooring of the palace, which is accessed via a low-tech elevator shaft. The palace is what identifies Spargus from afar, even in the midst of a sandstorm, as it burns a bright, tall torch. Through the alley, the coastal (western) section of Spargus may be located. This area contains many more stone buildings, the primary market, and the gun turret tower placed at the mouth of the Spargus beach. The market consists of a row of food stands and various containers which make odd types of fruit available. This fruit attracts kanga-rats, which Kleiver once tasked Jak with eliminating. The only flora in Spargus consists of palm trees and an odd cacti species. Spargus also has an interesting diversity of fauna, namely including rats and geckos, but also on some occasions, kanga-rats.

Absolute law was enforced by Damas. It is unknown if such dated culture remained under the leadership of Sig. Although some laws were observable during Jak 3, the rest of them and to what extent they were enforced remains unknown.

The water well and light eco vent in Spargus. 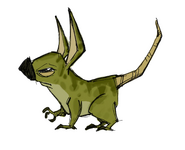