Tess is a character featured in Jak II and Jak 3, with cameo appearances in Daxter and Jak X: Combat Racing. One of the most valuable and courageous members of the Underground rebel organization, she is introduced as the bartender at the Hip Hog Heaven Saloon, working undercover to spy on crime boss Krew. She would eventually become Daxter's primary love interest, despite being a human herself.

Later, Tess designed weapons for the Freedom League during the war in Haven City, while also serving as interim manager of the Naughty Ottsel in Daxter's absence. Tess was ultimately transformed into an ottsel, like Daxter, by the Ottsel Leader, which she appeared to embrace. While all known Precursors are ottsels, it is unknown whether Tess is a Precursor herself simply by virtue of being an ottsel.

Tess was introduced early on in Jak II, when Jak and Daxter approached the Underground Hideout in search of Torn. She did not speak during the encounter, instead coming across as cold and suspicious, in unity with Torn's approach to newcomers.[1]

Tess was eventually sent by Torn to spy on Krew, who despite exchanging intelligence with the Underground, was evidently withholding certain secrets. Tess got a job as a bartender at Krew's Hip Hog Heaven Saloon, through which she would gather and relay information to Torn. When Daxter eventually recognized her at the saloon,[2] she was much friendlier to the duo, presumably due to their membership with the Underground, even coming across as flirtatious with Daxter at times. Despite this, Tess was careful not to blow her cover, and acted very distrusting of Krew.[3]

Later, Tess was arrested by the Krimzon Guard and imprisoned at the fortress, along with the young and old Samos Hagais. For the latter two, Torn was forced by Baron Praxis to betray them, and revealed their location at the Tomb of Mar. However, Tess was not at the tomb; whether Torn revealed Tess' role as a spy or her arrest was unrelated is unknown. Jak and Daxter ultimately rescued the group, after which Tess embraced Daxter as her "little hero".[4]

Tess later informed Jak and Daxter of a mysterious artifact that Krew had stashed in the Metal Head Mash machine, noting that he seemed distressed while doing so. The artifact turned out to be the Time Map, which Keira needed for the rift rider. Tess promised to take the artifact to Keira while Jak and Daxter rescued Sig, who she said was sent by Krew to the Underport.[5]

Tess was lastly seen at the saloon, after Jak and Daxter had killed Kor. Daxter had taken ownership of the establishment and rebranded it as the Naughty Ottsel, mounting Kor's head in the back of the room, which Tess admired.[6]

After Jak II, Daxter recounted the story of how he rescued Jak from prison, narrating the events of Daxter, a prequel to Jak II. This occurred at the Naughty Ottsel, in the company of Tess, Jak, Keira, Samos, Osmo, Ximon, and Taryn, during the epilogue.[7] This is the only time Tess was seen in this game.

Shortly before Jak 3, Daxter left Haven City to accompany Jak during his banishment to the Wasteland. He made Tess interim manager of the Naughty Ottsel in his absence,[8] though it was eventually requisitioned by the Freedom League under Torn, who needed to use it as a provisional headquarters for the war.[9] To help with the war effort, Tess began developing high-grade weapons[10] and running the gun course.[8] Tess also assisted Keira in the development of the new JET-Board, building into it the jet repulsor weapon.[11]

Yeah. I just finished this new gun. It sports a multi-port, large-bore, gyro-burst launcher with blowback breech assist, using full-jacket, eco-depleted, armor-piercing slugs, and a continuous kill zone scanner for tight groupings at a high-cycle rate of fire. (chuckles) It's a hobby.

Tess first appeared later on in Jak 3, after Jak and Daxter returned to Haven City. The duo visited the gun course as Tess was putting the finishing touches on the Gyro Burster, a Morph Gun upgrade, though Tess refused to give it to Jak until he proved he could protect Daxter by completing "Beat gun course 1".[10]

Tess later offered Jak the Plasmite RPG if he went through a new gun course she had programmed to simulate new enemy tactics (namely, targets would now shoot), in the mission "Beat gun course 2". Tess and Daxter's public display of affection mildly annoyed Jak, with Tess expressing that the city was "too dangerous", and that they need their "own little place in the country", with "a little ottsel run on the side of the house" for Daxter.[12]

At the end of the game, the Precursor Ottsel Leader granted Daxter his wish for pants. After Tess remarked that she wished she had a pair "just like that", the Leader remarked "Be careful what you wish for" as he transformed her into an ottsel. Daxter reassured her that she would get used to it, and that she "may want to shave some parts"—regardless, Tess seemed to embrace her new form. As Tess and Daxter went in to kiss, Jak interrupted them,[13] just as Daxter had done to Jak and Keira twice before.

Tess was mysteriously absent from Jak X: Combat Racing, and not only didn't accompany Daxter to Kras City for the reading of Krew's will, but also was not seen in Haven City. However, she makes a cameo appearance in the form of a purchasable cutscene from the Secrets Shop named "Hot Coffee", wherein she and Daxter share a beverage at the Naughty Ottsel.[14][a] 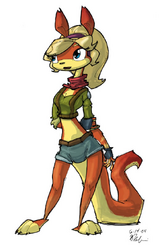 Tess is an ottsel, a slender, anthropomorphic hybrid between the otter and weasel. While she's a bit taller than Daxter, she is thinner and overall one of the smaller ottsels seen in the series. Like all ottsels, she has orange fur with yellow striping patterns and feet, and a yellow underbelly.

As a human, Tess was of average height and build, and was notedly attractive.[c] She had fair skin and long, pointy ears, typical of all humans. In both forms, she has light blonde hair, blue eyes, and wears a green, low-cut, midriff-length jacket, with its long sleeves rolled up to her elbows. She wears blue denim short shorts, with a brown belt and parts of her underwear exposed at the hips. Accessory-wise, she wears blue fingerless gloves, a red scarf (similar to Jak's), and a purple headband.

Superficially, Tess has a carefree and eccentric personality, and was one of the few people gullible enough to believe, or at least indulge in, Daxter's tall tales.[18] However, Tess can also come across as intimidating when met with new, untrustworthy faces,[1] or when it comes to Daxter, of whom she is fiercely protective, even towards Jak.[19]

Tess is described as one of the Underground's most valuable[20] and courageous members,[21] assisting Torn in the way of undercover work and intelligence-gathering. Later, she helped by building high-grade weapons and maintaining a training gauntlet for soldiers while working with the Freedom League. Tess takes to weapons development as a hobby, according to herself, but appears to be more deeply passionate and knowledgeable about the subject than she lets on.[10]

Tess is infatuated with Daxter, seeing him as stronger and braver than he really is, which Daxter encourages. When the two are together, Tess is often seen stroking Daxter's back or belly in admiration. She often embraces him, which Daxter sometimes tries to downplay to maintain his cool exterior.[10]

Tess is portrayed by Britton A. Arey,[22] credited as Britton A. Hill, M.D. in Jak II.[23] She is married to series writer Dan Arey,[24] and Tess' out-of-character dialogue in the Jak 3 model viewer secret references this, about how she "totally love[s] the writer on this project", that he's "hot, too", and that she "should have dated him more" to get a bigger part in the game.[25]

Writer Dan Arey explained that they had been dancing around the problem they had with Daxter and Tess' interspecies relationship, and that Tess' transformation into an ottsel at the end of Jak 3 finally allowed Daxter to "get his little girlfriend".[26]

The Last of Us, a game also developed by Naughty Dog, features a character named Tess which may be a reference to Jak and Daxter's Tess, among many other references to the series.

Retrieved from "https://jakanddaxter.fandom.com/wiki/Tess?oldid=136094"
Community content is available under CC-BY-SA unless otherwise noted.