Jak and Daxter Wiki
Register
Don't have an account?
Sign In
Advertisement
in: Locations in Jak II

The Tomb of Mar was a historical under-ground temple fabled for being the resting spot of the legendary founder of Haven City, Mar. It was also known for being the sacred hiding spot of the last Precursor Stone. It was discovered and visited by Jak in Jak II after the completion of the Seal of Mar and activation of the Light Tower. The tomb previously had a towering statue of Baron Praxis on the roof, which was destroyed by the Light Tower's beam.

For many years, Baron Praxis was in a desperate search for the Tomb of Mar in order to gain access to the Precursor Stone and destroy the Metal Heads with a custom piercer bomb, powered by the stone. When Jak collected all three pieces to the Seal of Mar ("Get seal piece at Water Slums", "Get seal piece at dig", and "Beat Onin game") he was able to activate the Light Tower in No Man's Canyon ("Use items in No Man's Canyon") and reached the tomb first. The Underground then intended to use young Jak, "the kid" as the true heir of Mar, to open the Tomb of Mar and "circumvent cunning tests" referred to as the Trials of Manhood. However, the tomb's oracle refused to admit the kid on the grounds that he was too young to face the tests. Jak then forced his way through the door of the tomb as it was closing, and began the tests.

After passing the first and second tests of manhood, Jak entered the main temple where the oracle containing the stone resided. However, just as he was about to receive it, Baron Praxis arrived and began drilling out the stone with his Widow mech. Torn had revealed their location to Praxis in order to save Ashelin Praxis from death, which also resulted in the arresting of Tess and Samos Hagai (both the Shadow and the Sage). Jak then battled the Baron (in the mission "Defeat Baron in Mar's tomb"), but Praxis escaped with the stone (but later gave it back to Jak on his deathbed).

The Tomb of Mar was never visited again after this, and was rendered either inaccessible or destroyed after the fall of the Palace in the beginning of Jak 3.

Technically a hypogeum, the Tomb of Mar's large stone monument was located just south of the Palace and north of the Port. It was not known to be the tomb, as the door was obscured by concrete walls before the Light Tower's activation. Once inside the tomb, the primary stone barrier is accessed only through an elevator. Past the barrier leads to a large room filled with shallow levels of an oily water substance, endlessly inhabited with fodders. On either side, there are two entrances to deeper chambers and rooms in the tomb, comprising each of the trials of manhood. Each passage contains varying platform challenges. The left one consists mostly of platform-based tests, such as swinging poles, moving and falling platforms, spikes, and more. Daxter also had an encounter with the mother widowmaker here, which he managed to evade and end up in the final room. The right one consists of mostly puzzle-based tests, such as sound puzzles, recognition puzzles, speed puzzles, and coordination puzzles.

After passing both of the tests of manhood, indicated by a button that can be pressed at the end of each of the rooms, a laser will bolt to the top of the main room, opening the door to the main statue of Mar, containing the stone. This main room appears to be a temple, possibly the actual tomb, with its walls depicting symbolism of the Metal Head Wars, as implied when the oracle told Jak about the history of the great war.

Wall sculpture depicting the first of the Metal Head Wars

Map layout of the Tomb of Mar 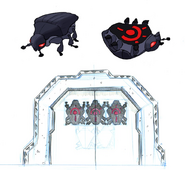 Concept art of the key beetles