Land on Brink Island and search volcano for eco seeker

The Vulcan Fury (also known as the Vulcan Barrel in Jak II) is a weapon used by Jak during Jak II, Jak 3, and The Lost Frontier. It is a blue eco-powered blue mod Morph Gun and gunstaff weapon, focusing on rapid fire.

Jak first received the Vulcan Barrel from Torn before going to the "Protect site in Dead Town" mission, in which Jak had to fight metal heads trying to reach the sacred site, which turned out to be Samos' hut. In Jak 3, Damas awarded Jak the Vulcan Fury upgrade after the mission "Defeat marauders in arena".

In The Lost Frontier, the Vulcan Fury is a modified piece of Precursor technology discovered by a sky pirate.[1] It was then patched into Jak's gunstaff, courtesy of Keira, just prior to the mission "Get supplies from Far Drop".

The Vulcan Fury is a cylindrical Morph Gun mod, with a large rotating barrel quickly dispensing blue ammo shells as the gun fires its shots in rapid succession. It appears to be the heaviest weapon, as Jak's spin kicks are noticeably slower, and he carries it low-set with its laser sight pointed slightly upwards (although will still auto-aim).

For the gunstaff, however, the Vulcan Fury seems to be rather similar to other mods but with blue mechanics, built upon the gunstaff base.

Similar to the Blaster, the Vulcan Fury utilizes a laser sight for longer-range precision. It only differs in terms of its rate-of-fire, which in the case of the Vulcan Fury once warmed up, becomes a continuous stream of blue bullets. It is at this point where the accuracy from the laser sight becomes effectively useless, making it sub-par for sniping enemies. Ammo is relatively scarce so it is not recommended to attempt to use it for a "spray and pray" tactic either, as the gun fires at an angle and it is thus difficult to properly hit enemies. This does not mean it cannot be useful at times, if no other options are available it might very well mean victory or death. The sling blaster, spyder gunner, flying spider, early prototype roboguards, the blast bot, silverbacks, franken apes, and ghoul spiders are all highly vulnerable targets to the fast damage dealing capabilities of the Vulcan Fury.

Because they are held low, blue mod weapons have some quirks with their melee attacks. When Jak is holding the Vulcan Fury and he does a spin kick, he uses the momentum of his leg to swing the gun around without letting go of the Vulcan Fury. When Jak performs the smash attack with the Vulcan Fury, he swipes it upwards instead of the usual downwards swing.

When enemies are hit by the Vulcan Fury in Jak II and Jak 3, they will collapse before they die (usually slowly falling forward from the waist) as if they have been shot. With other weapons they would simply fall backward without this happening. 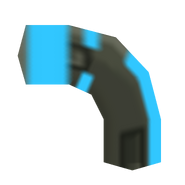 Gunstaff ammo
Add a photo to this gallery

Retrieved from "https://jakanddaxter.fandom.com/wiki/Vulcan_Fury?oldid=133662"
Community content is available under CC-BY-SA unless otherwise noted.