Not to be confused with the general term "wasteland",[a] the Wasteland is a large desert island featured in Jak 3. It was here where Damas, Jak, and others were banished for life from Haven City. The Wasteland is primarily inhabited by "wasteland" metal heads and marauders, containing the Metal Head desert nest and Marauder stronghold, respectively. There is a refuge city on the coast of the Wasteland named Spargus, ruled by the outcast Damas. Its citizens are referred to as "wastelanders", self-described as "Haven City's refuse."[1] The island is also home to the Great Volcano and Monk Temple.

During Jak X: Combat Racing, a small portion of the Wasteland was reconstructed and featured as a race track called the Desert Arena.

In the opening cinematic of Jak 3, an air train is seen arriving at the desert Wasteland, with an escort of soldiers to drop off Jak for his banishment. Veger read the sentence, accompanied with Ashelin Praxis, Daxter, and Pecker to protest. Before departure, Ashelin handed Jak a beacon connected in some way to the refuge city of Spargus. The king of the city, Damas, along with Kleiver and a group of other Wastelanders, eventually found Jak and took him in to rehabilitate, where he afterwards had to prove his worth by earning the title of "Wastelander". As such, he carried out various tasks for Damas in the Wasteland, including collecting artifacts, corralling wild leapers, rescuing stranded Wastelanders, defending Spargus from marauder attacks, and more.

Initiation challenges in the Wasteland were also given to Jak by Kleiver, Spargus' "gate keeper" and manager of the garage. Such missions included "Beat Kleiver in desert race" and "Destroy metal head beasts", among others. Jak completed various other missions in the Wasteland, some given to him by Sig and Seem.

The final mission, "Destroy final boss", also took place in the Wasteland. When Cyber Errol landed a terraformer on the planet, it landed in the Wasteland, where he began his plan of complete destruction. However, Jak eventually finished him, the game ending in the Wasteland.

The Wasteland made some appearances as separate race tracks in Jak X: Combat Racing, most notably the Canyon Run, Wasteland Isle, and Desert Arena, all locations closely resembling the Wasteland, but only the third is similar in geography.

The Wasteland is a large desert island, consisting of sandy and rocky terrain. It is littered with cacti, smaller vegetation, large sand dunes, palm trees in some areas, two volcanoes and various other igneous structures, islets off its coast, and also several stone and concrete structures echoing a possible former civilization. The island is constantly grazed with sand storms and bands of marauder buggies, and on some occasions, large metal head beasts. Damas notes the deadliness of the storms, stating "they will tear the flesh from your very bones."[2]

The island itself appears to be divided into four quadrants, separated by the central Great Volcano (north and south) and a river running perpendicular to it (east and west). Spargus is located along the northern coast of the Wasteland, with its Palace's brightly-burning flame serving as a location signal. The north-east quadrant contains the small race track used for buggy races, along with several palm trees, rare in the Wasteland. It also contains the air train used for transport in and out of the island. The south-east quadrant, placed adjacent to the horizontal and lateral rivers, contains what appears to have been a former village, which is now home to the corrals. Off this quadrant's coast are a series of islets leading to the Monk Temple. 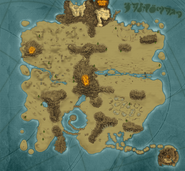 Map layout of the Wasteland