The yakow[a] is a species in the Jak and Daxter series, featured in The Precursor Legacy and Jak II, and mentioned in Daxter and Jak X: Combat Racing. A hybrid of the yak and cow, they can be found grazing on the Farmer's farm in Sandover Village, and within wooden pens in the Gardens of Haven City, during the first and second game, respectively.

Yakows have a unique relationship to humans, who domesticated them, providing a variety of uses such as nutrition and labor. The Farmer even named one of his female yakows, Bessie.[8]

In The Precursor Legacy, the Farmer's yakows had been startled out of their pen when lurkers tried to steal them[9] for unknown purposes.[b] The Farmer, being too lazy to corral them back himself, commissioned Jak and Daxter to herd them back in exchange for a power cell, in the mission "Herd the yakows into their pen".

In Jak II, yakows could be found in two pens in the South Garden, one directly after the entrance from the Port, and one directly preceding the exit into the West Bazaar. Unlike in the first game, Jak could not force them to move by attacking them; instead, they would stubbornly plant their feet and moo. However, he could influence their direction by walking alongside them while they moved on their own.

Yakows are large, sturdy bovines, and as a crossbreed of yaks and cows, have features of both animals. They have the long ears, tail, and general body and head shape of cows, with the mane, build, and horns of yaks. Their coloration is fairly unique to them, with a yellow hide, dark brown mane, and dark blue horns.

While fully domesticated by humans, yakows are notoriously stubborn, described by the Farmer as "ornery".[9] Yet, they can evidently be broken in and used as mounts[5] and racing animals,[10] among other uses, such as beasts of burden and livestock for milk[1][9][11] and meat.[12] Their own diet primarily consists of grass,[2][5] sugar lumps,[5] and presumably hay, given the bales of them on the Farmer's farm. Other uses of the animal involve their bones and bladders.[13] Yakows share a role with glubs and lurker sharks as the only named creatures documented to be used as food in the series. 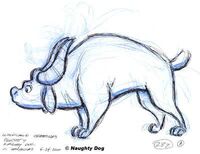 Examples of concept art of the "Beasts of Burden" (top) and "Woodland Creatures" (bottom), which would be used as the basis for the yakow.

Originally known as yakalows during development,[14] yakows were designed by concept artist Charles Zembillas as part of a group of creatures known as the "Beasts of Burden",[15] with some elements merged from another group called the "Woodland Creatures".[16] Zembillas was directed to make something that was familiar yet not; starting with typical farm animals as a basis, with some twists.[17] Zembillas expressed dissatisfaction with the piece that ultimately most resembled the final design (pictured right top), explaining that, "Without a single dominant trait to catch your eye, the design becomes boring and easily forgettable."[15]

Yakows are the only hybrid species in the Jak and Daxter universe to actually exist in the real world. Also known as dzos or yattle, they are thought to be more effective in the production of meat and milk,[18] staples which the yakow provides in the series. Despite this, it is unknown whether The Precursor Legacy originally took inspiration from real-world yakows, or if it is merely a coincidence, as most sources published on the subject are dated after the game's release.[18]

In the PlayStation 2 and 4 versions of Jak II, guards would attack yakows under certain conditions, likely constituting a bug. If Jak transformed into Dark Jak near a yakow, triggering the alarm system, or if during the Metal Head invasion in Act 3, the guards would occasionally shock yakows with their tasers, to no effect.