Zoomer is the general term for the common civilian zoomers seen in Haven City during Daxter, Jak II and Jak 3. They are the most common mode of transportation for Haven citizens and are often found parked at set locations throughout the city. They come in a number of different varieties and colors but come down to three different types; the one-seated zoomer (resembling a bike, comes in three different basic forms), the two-seated zoomer (comes in two different basic forms, one of which is split) and the three-seated zoomer (has an extra seat in the center).

During Daxter, Jak II, and Jak 3, zoomers were used not only by civilians, but were also used by Jak and Daxter during certain missions which required quick transportation. The first example of this being in Daxter where Daxter used the service zoomer[1] (also known as the transit authority's zoomer)[2] in the transit system and prison.

The first example in Jak II was the "Make delivery to Hip Hog Saloon" mission, where Jak had to use a zoomer packed with a shipment of rare eco ore and deliver it to Krew. This particular zoomer is always a common bike zoomer, painted blue with yellow trim, one exactly like the zoomer hanging in the Underground hideout. Later Jak has to use a two- or three-seater in the "Shuttle Underground fighters" mission. The next mission using a zoomer is "Escort Kid to power station", in which Jak had to use a two-seated zoomer to drive the heir of Mar to the power station to be watched over by Kor. The last mission during Jak II using a zoomer was "Beat Erol in race challenge", where Erol challenged Jak to a preliminary exhibition match in the Port.

During Jak 3, Jak had to use a two-seated zoomer to escort and protect Jinx in the mission "Destroy eco grid with Jinx". It should be noted that zoomers were used in several more missions although they did not serve as big a role in these, they did remain the most common way for Jak to get around the city, however.

As previously mentioned, zoomers come in three basic forms, one-seated, two-seated, and three-seated zoomers. They come in various colors, and maintain a basic pattern of metallic bumpers, headlights, steering assists, and propulsion jets in the back. For one seaters, upon using the brakes, a brake flap will open and help stop the zoomer. In various other zoomers, you may see steering assists adjust and turn to help control the zoomer.

The two-seaters have two steering wheels and either of them can be used to control the vehicle.

Each of the three different types of zoomers has their own properties in terms of speed, strength, and handling. The one-seater is the fastest of the three but also the weakest, a frontal collision with a wall almost certainly means destruction or ensures your top speed is slower than that of a three-seater. The three-seater is the polar opposite, it is slow and cuts corners poorly but on the other hand it can take a lot more damage. The two-seater is the balanced one between these two, with an average speed and armor, although the split version is slightly faster and weaker than the regular version.

In Jak 3, the single-seater zoomer appears to be capable of sustaining more damage in a single high-speed crash. They also have an automatic braking system that activates as soon as the user gets off, opposed to the zoomers in Jak II which continued to move. Jak 3 zoomers are also noticeably quieter than their Jak II counterparts.

All zoomers in Haven City abide by the Haven City transportation system, and can drive in one of two hover zones, low, and high. When in the low hover zone, a zoomer will be suspended only a little under a foot off the ground. When in the high hover zone, they are suspended higher than one of the medium-sized huts in the Slums. One-seated zoomers are able to perform a small hop by pressing 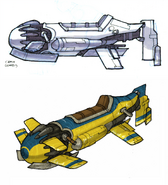 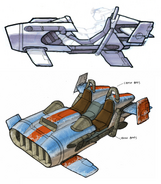 Concept art
Add a photo to this gallery

Retrieved from "https://jakanddaxter.fandom.com/wiki/Zoomer?oldid=135876"
Community content is available under CC-BY-SA unless otherwise noted.